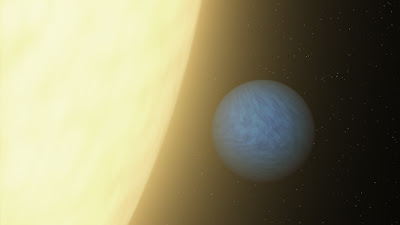 The above image is an artist's conception of the exoplanet 55 Cancri e orbiting Cancri A, a yellow dwarf star. Image Credit: Spitzer/NASA/JPL-Caltech

NASA's Spitzer Space Telescope has confirmed that a known planet beyond our solar system (an extra-solar planet, or exoplanet) is in fact a rocky planet like our Earth, but much larger. The planet is not habitable, but the detection is a historic step in the search for Earth-type planets.

The planet, called 55 Cancri e, falls into a class of planets called super Earths, which are more massive than our home world but less massive than giant planets like Neptune. The planet is about twice as big and eight times as massive as Earth. It orbits the bright star 55 Cancri. And the orbital period is very short -- only 18 hours.

Previously, Spitzer and other telescopes were able to study the planet by analyzing how the light from 55 Cancri changed as the planet passed in front of the star. But in the new study, Spitzer measured how much infrared light was reflected from the planet. The results reveal the planet is likely dark in appearance, and its sun-facing side is more than 2,000 Kelvin (3,140 degrees Fahrenheit), hot enough to melt metal.

The new information is consistent with a prior theory that 55 Cancri e is a water world: a rocky core surrounded by a layer of water in a "supercritical" state where it is both liquid and gas, and topped by a blanket of steam.

Some suggest that 55 Cancri e might be similar to placing the planet Neptune very close to our sun. The resulting world would have most of its atmosphere boiled away, leaving a large, rocky core and a remnant atmosphere that is super-heated on top, with some areas below cool enough for liquid water to exist.

The 55 Cancri system is relatively close to Earth, at a distance of 41 light-years. It has five known planets, with 55 Cancri e the closest to the star and tidally locked, so one side always faces the star. Spitzer discovered that the sun-facing side is extremely hot, indicating the planet probably does not have a substantial atmosphere to carry the sun's heat to the unlit side.

For the record, 55 Cancri is located in the constellation of Cancer, the Crab, and it is a double star system. Cancri A is a spectral type G8V yellow dwarf star and Cancri B is a spectral type M3.5-4V red dwarf star. Cancri A has an apparent magnitude of 5.95, making it visible through binoculars. Cancri B is of 13th-magnitude brightness and only visible through larger instruments, such as telescopes. All five planets orbit Cancri A. The celestial coordinates for 55 Cancri (technically, the 55 Cancri A coordinates) are RA 08h 52m 35.8s, Dec +28 degrees 19 minutes 51 seconds.

And now, the Spitzer mission particulars...

JPL manages the Spitzer Space Telescope mission for NASA's Science Mission Directorate in Washington. Science operations are conducted at the Spitzer Science Center at the California Institute of Technology (Caltech) in Pasadena. Data are archived at the Infrared Science Archive housed at the Infrared Processing and Analysis Center at Caltech. Caltech manages JPL for NASA.