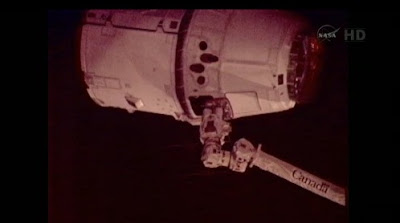 The above image shows the the SpaceX Dragon spacecraft immediatly following capture by the ISS robotic arm. Image Credit: NASA

A few minutes ago, at 8:56 AM CT / 9:56 AM ET, the crew of the International Space Station (ISS) used their robotic arm to successfully capture the Space Exploration Technologies (SpaceX) Dragon spacecraft as it held position meters from the ISS. At the time of capture, the ISS and Dragon were on the night side of Earth, passing over northwestern Australia.

Once the ISS crew completes their visual inspection of the spacecraft, they and the ground crews will begin the process of caring the Dragon spacecraft to the designated ISS docking port for the "birthing" of the spacecraft. Some time later, the ISS crew will step through a two-hour process to open the Dragon hatch and then begin unloading the ISS supplies. While these steps may seem a bit tedious, they are necessary precautions because of the new spacecraft, new SpaceX ground support crew and new procedures.

This is the first of 12 cargo mission that SpaceX has contracted for NASA through 2015, totaling $1.6 billion. SpaceX has hope of expanding their ISS support role to include the transport of crew members. For more on SpaceX, visit their home page: http://www.spacex.com/

To learn more about the International Space Station, visit the following URL: www.nasa.gov/station