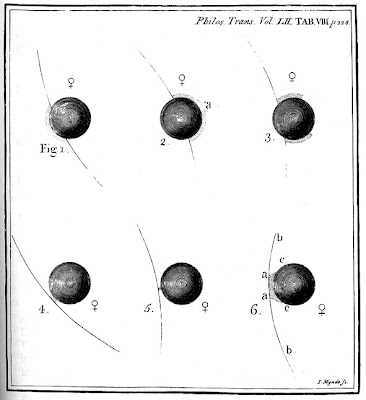 The above image is a series of drawings of the black-drop effect as depicted by Swedish chemist and mineralogist Torbern Olaf Bergman (1735 - 1784). Bergman made the drawings based on his observations of the 1761 transit of Venus. Image Credit: The image is in the Public Domain.

We have seen that the 1761 transit of Venus was historic for several reasons. We now consider another: the first recording of the black-drop effect.

British astronomer Edmund Halley had encouraged international cooperation in observing the 1761 transit of Venus and had stressed the importance of accurately recording — to the second, the thought — the times of these four points of contact. The data from the various expeditions could then be use to determine the solar parallax and, from that, the distance from Earth to the sun — a foundational measurement in astronomy that has come to be known as the Astronomical Unit.

This optical phenomenon has come to be known as the "black-drop effect." The effect gets its name from the shape created as the transiting body moves onto and off of the sun's disc. At the points of second contact and third contact, the transiting body and the nearest edge of the sun's disc appear to elongate toward each other, thus creating a shape that resembled a drop of black fluid. Some refer to this shape as a "tear drop."

While it was later confirmed by other methods that Venus had an atmosphere, this was eventually ruled out as the reason for the black-drop effect, because the phenomenon has also be seen during transits of Mercury, which has no significant atmosphere. As to the cause being atmospheric turbulence, this possibility was eliminated following the 1999 and 2003 observations of the transit of Mercury, which were made from Earth orbit using NASA's Transition Region and Coronal Explorer (TRACE). During both transits the black drop effect was observed.

So what is the cause of the black-drop effect? An answer is proposed by Jay M. Pasachoff, Glenn Schneider, and Leon Golub, the ones who studied the results of the 1999 and 2003 Mercury transits observed by TRACE. According to the trio, the cause of the black-drop effect is a combination of two factors: the point-spread function of the imaging system and solar limb darkening.

A point-spread function (PSF) is the method by which an imaging system responds to a point source or point object. The imaging system may be artificial, as with a CCD devices, and it may be natural, as with human eyes.

The team found that when the these two factors were removed, the black-drop effect was not evident. The team's final report is available to read online: "Space Studies of the Black-Drop Effect at a Mercury Transit." G. Schneider, J. M. Pasachoff, L. Golub. Submitted October 14, 2003. Cornell University Library. URL: arxiv.org/abs/astro-ph/0310379v1