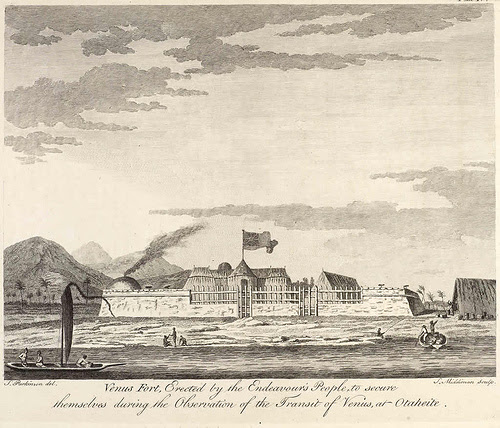 The above image is a drawing of Fort Venus, constructed on the island of Tahiti for the 1769 transit of Venus. The drawing was made in 1771 by Charles Praval from a picture by H.D. Söring. Image Credit: The Image is in the Public Domain.

When the Royal Society chose observing locations for viewing the 1769 transit of Venus, it followed the suggestions of the late Edmund Halley in his 1716 article. The Society chose the North Cape at the Arctic tip of Norway, Fort Churchill at Hudson Bay Canada and a yet-to-be-named island in the South Pacific.

In June 1767, British navigator Samuel Wallis (1728 – 1795) discovered the island of Tahiti. Wallis returned from his voyage in time to help the Royal Society decide that Tahiti would be an ideal location. Tahiti had a big advantage in that it was one of the few islands in the South Pacific for which they knew the longitude and latitude. But the British Admiralty was less concerned with the choice of the South Pacific island and more concerned with the secret mission that would follow the transit -- the search for the mysterious Terra Australis Incognita (the unknown land of the South).

The HMS Bark Endeavour was chosen to carry the Tahiti expedition. James Cook was commissioned as Lieutenant and appointed to command the vessel. Cook was chosen for his outstanding seamanship, his navigational qualifications, his astronomical skills, and the fact that he had previously observed the 1761 transit of Venus in Canada for the Royal Society. Also in the expedition were British astronomer Charles Green (1735 – 1771), Swedish naturalist Daniel Solander (1733 – 1782), Lieutenant and second-in-command Zachary Hickes (c. 1729 – 1771), and British American Captain John Gore (died 1790).

Two days after the Endeavour reached Tahiti, Cook began construction of an observatory on shore. The observatory would be known as "Fort Venus." In addition to the Fort Venus observations, Cook had Hickes lead a party to a point on the east coast of the island, and had Gore lead another group of thirty-eight on the neighboring island of Eimeo (now Mo'orea). In addition to these, Cook, Green and Solander would take independent observations with their own telescopes. Cook was taking every step he could think of to ensure that accurate observations were recorded for the transit.

On the day of the transit, the sky was clear and all of the locations were able to observe and record the four transit contact points. But when their results were compared, the times differed greatly, particularly for the times of second and third contact. The disagreement of the times for second and third contact is now understood to be the result of the optical phenomenon known as the black-drop effect. Cook suggested that the time differences were evidence that Venus had an atmosphere.

Following the transit, Cook and the Endeavour expedition proceeded on its secret mission to discover the southern continent. In 1770, Cook officially discovered and charted for the British government the Eastern coastline of Terra Australis (land of the South), which is known today as Australia. Cook named the charted coastline New South Wales.

During the charting of coastline, the Endeavour was damaged in a collision with the Great Barrier Reef. On the return voyage to England, the Endeavour stopped for ten weeks of repairs at the Dutch port of Batavia (now Jakarta). At that time the port was rife with fever and dysentery. Green took ill and died there. Hickes also died at Batavia, but in his case it was from consumption, an archaic name for pulmonary tuberculosis. Cook later reported that Hickes had been so afflicted since leaving England, but that it had not interfered with his duties.

Upon review of Cook's report, the Royal Society decided that the transit timing discrepancies were a failure in the observations. The Society also decided to blame Green, who was dead and so could not defend himself. Cook was also rebuked, and in a manner so sharp that the Society had it removed from its official proceedings. The Royal Society eventually learned that other observing locations had similar problems in timing because of the black-drop effect.