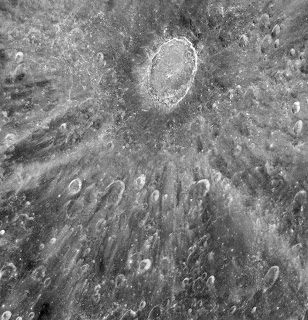 The mottled landscape surrounding the impact crater Tycho is among the most violent-looking places on our Moon. But astronomers didn't aim NASA's Hubble Space Telescope to study Tycho. The above image was taken in preparation to observe the transit of Venus across the sun's face on June 5-6. What astronomers learn from the transit may help in the search for habitable extra-solar planets (exoplanets).

Hubble has no filtering precautions, so it cannot look directly at the sun. Instead, astronomers are planning to point the telescope at Earth's moon, using it as a mirror to capture reflected sunlight and isolate the small fraction of the light that passes through Venus's atmosphere. Imprinted on that small amount of light are the fingerprints of the planet's atmospheric makeup. These observations will mimic a technique that is already being used to sample the atmospheres of giant planets outside our solar system which pass in front of their stars -- like Spitzer did with 55 Cancri e.

In the case of the Venus transit observations, astronomers already know the chemical makeup of the Venus atmosphere, and that it does not show signs of life on the planet. But all of this knowledge is a good thing, because the Venus transit lets astronomers test whether this observing technique detects the familiar chemical signature of Venus. If it does, they have a chance of detecting the very faint fingerprints of a distant Earth-like planet, even one that might be habitable for life, that transits its own star. Venus is an excellent proxy because it is similar in size and mass to our planet.

The Hubble Space Telescope (HST) was carried into orbit by the Space Shuttle Discovery in April 1990. HST is a 2.4-meter (7.9 ft) aperture telescope in low Earth orbit, Hubble's four main instruments observe in the near ultraviolet, visible, and near infrared. The telescope is named after the astronomer Edwin Hubble. HST was built by NASA, with contributions from the European Space Agency (ESA), and is operated by the Space Telescope Science Institute. The HST is one of NASA's Great Observatories, along with the Compton Gamma Ray Observatory, the Chandra X-ray Observatory, and the Spitzer Space Telescope. The HST mission websites are: hubble.nasa.gov and asd.gsfc.nasa.gov/archive/hubble and hubblesite.org