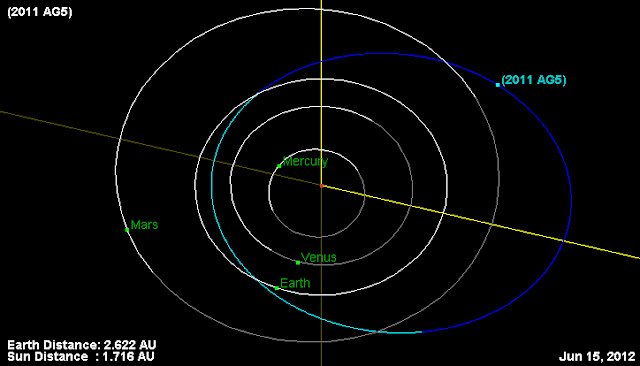 The above image shows the location, as of June 15th, of asteroid 2011 AG5. Image Credit: NASA/JPL-Caltech

NASA recently released the latest analysis data and findings on Asteroid 2011 AG5. Researchers anticipate it will fly safely past and not impact Earth in 2040.

The current findings and analysis data were reported at a May 29 workshop at NASA's Goddard Space Flight Center in Greenbelt, Maryland, attended by scientists and engineers from around the world. Discussions focused on observations of potentially hazardous asteroids (PHAs).

This near-Earth asteroid was discovered January 8th, 2011 by the Mount Lemmon Survey, part of the NASA-supported Catalina Sky Survey, operated by the University of Arizona in Tucson. At the time of discovery, using a 1.52-meter (60 in) reflecting telescope, 2011 AG5 (AG5) had an apparent magnitude of 19.6. AG5 has a diameter of about 140 meters (approximately 460 feet). Several observatories monitored AG5 for nine months before it moved too far away and grew too faint to see. In addition, several pre-discovery observations were identified after the fact, and added to the data.

The observations compiled to date indicate there is a slight chance that AG5 could impact Earth in 2040. But the workshop attendees expressed confidence that in the next four years, analysis of space and ground-based observations will show the likelihood of AG5 missing Earth to be greater than 99 percent.

On June 19th, 2004 a new near-Earth asteroid was discovered, provisionally designated 2004 MN4 and later numbered 99942 and named Apophis. Apophis was thought to pose an impact threat in 2036. But additional observations taken from 2005 through 2008 enabled NASA scientists to refine their understanding of the asteroid's path, which showed a significantly reduced likelihood of a hazardous encounter.

The greater the number of observations astronomers make of a near-Earth asteroid, the better the understanding they have about the body's orbit. Typically, this knowledge allows them to rule out a possible impact.

Observations of AG5 have been limited to date because of its present location beyond the orbit of Mars and in the daytime sky on the other side of the sun. In fall 2013, conditions will improve to allow space- and ground-based telescopes to better track the asteroid's path. At that time, AG5 will be 91 million miles (147 million kilometers) from Earth but favorably located for observations in the late evening sky.

The level of hazard will gain even more clarity in 2023, when the asteroid is approximately 1.1 million miles (1.8 million kilometers) from Earth. If AG5 passes through a 227-mile-wide (365-kilometer) region in space, called a keyhole, in early February 2023, Earth's gravitational pull could influence the object's orbital path just enough to bring it back for an impact on February 5, 2040. If the asteroid misses the keyhole, an impact in 2040 will not occur.

Researchers note that given their current understanding of AG5's orbit, the chance of its passage through the keyhole is very remote. Even so, they acknowledge the slight chance that computed odds could rise as a result of observations to be taken from 2013 to 2016. According to the experts at the workshop, even if the odds do increase, there is still ample time to plan and carry out at least one of several viable missions to change the asteroid's course.

Potentially hazardous asteroids, or PHAs, are a subset of the larger group of near-Earth asteroids. They have the closest orbits to Earth's, coming within 5 million miles (about 8 million kilometers). They are large enough to enter Earth's atmosphere intact and cause damage on at least a local scale. Damage from an asteroid the size of 2011 AG5 could cover a region at least a hundred miles wide.

NASA established the Near-Earth Object (NEO) Observation Program in 1998 to coordinate the agency's efforts to detect, track and characterize Earth-approaching NEOs and comets larger than 1 kilometer in size. The program now also searches for NEOs as small as object 2011 AG5. NASA supports NEO observation, tracking and analysis activities worldwide. Activities are coordinated through the NEO Program Office at JPL.

To read the workshop report and findings, visit: neo.jpl.nasa.gov .

For information about NASA asteroid missions and activities, visit: www.nasa.gov/asteroids .