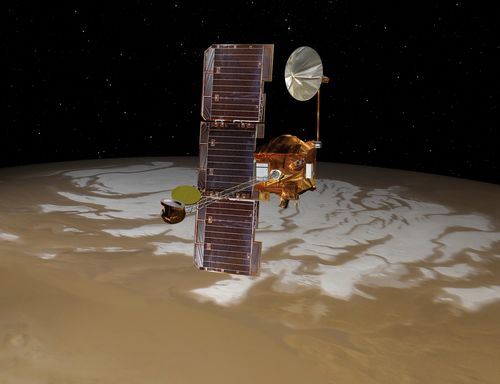 The above image is an artist's concept of NASA's Mars Odyssey spacecraft passing above the south pole of the planet Mars. Odyssey has been orbiting Mars since October 24, 2001. Image Credit: NASA/JPL-Caltech


NASA's Mars Odyssey orbiter had some problems in June, but has now resumed all normal spacecraft activities. Good thing they packed that spare...


Like many other spacecraft, Odyssey uses a set of three reaction wheels to control its attitude, or which way it is facing relative to the sun, Earth or Mars. Increasing the rotation rate of a reaction wheel inside the spacecraft causes the spacecraft itself to rotate in the opposite direction. Since its launch in April 2001 Odyssey had used these three wheels for its orientation. But on June 8th, UTC (June 7th, PDT) one of these wheels stuck for a few minutes. This caused Odyssey to go into "safe mode," in which the  spacecraft reduced its number of activities, pointed at Earth and awaited instructions.


Fortunately, the mission designers had the good sense to "pack a spare." In this case, a fourth reaction wheel which was skewed at angles to all three primaries so that it could replace any of them as needed.


Once the Odyssey engineers assessed that the primary wheel was no longer reliable, they discontinued its operation and turned to the fourth wheel, which had been in non-operational storage for more than 11 years. The wheel passed preliminary tests on June 12th, spinning at up to 5,000 rotations forward and backward.

Odyssey has and can use thrusters to control its attitude. But reaction wheels offer the advantage of running on renewable electricity from the orbiter's solar array, rather than drawing on the finite supply of thruster fuel. They also provide more precise control of pointing, which can enable higher data-rate communications through the orbiter's directional antenna. On June 16th, Odyssey began the several-day process of resuming normal spacecraft activities. At that time the spacecraft was pointed downward toward Mars. Controllers continued characterizing the performance of the replacement wheel over the days that followed, while assessing which other activities of the spacecraft could be performed reliably with reaction-wheel control of attitude.

Since its arrival October 2001, the Mars Odyssey orbiter has worked at Mars for more than 10 years, which is longer than any other Mars mission in history. Besides conducting its own scientific observations, it serves as a communication relay for robots on the Martian surface. NASA plans to use Odyssey and the newer Mars Reconnaissance Orbiter as communication relays for the Mars Science Laboratory mission during the landing and Mars-surface operations of that mission's Curiosity rover.