"Last Hurrah" for Dawn and Vesta 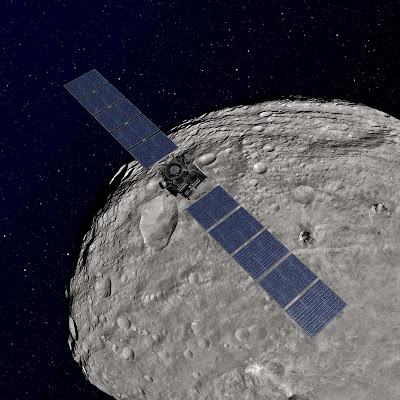 The above artist's concept shows NASA's Dawn spacecraft orbiting the giant asteroid Vesta. The depiction of Vesta is based on images obtained by Dawn's framing camera. Image Credit: NASA/JPL-Caltech

At the end of April, NASA's Dawn spacecraft and mission team successfully completed nearly five months of low-altitude study of giant asteroid Vesta, orbiting at an average altitude of 210 kilometers (130 miles). Beginning May 1st, Dawn made a gradual, six-week climb to an average altitude of 420 miles (680 kilometers) above the surface. And on June 15th, Dawn began its final major science data-gathering phase at Vesta, called high-altitude mapping orbit 2. We might also call this Dawn and Vesta's "Last Hurrah."

Observations obtained from this orbit will provide a companion set of data and images to those obtained during the first high-altitude mapping orbit phase, which was completed in October 2011. A key difference in this phase will be the angle of the sunlight hitting Vesta. The new angle illuminates more of the northern regions that were missed in previous mapping. The principal science observations planned in this new orbit will be obtained with the framing camera and the visible and infrared mapping spectrometer.

Following this final science data gathering phase, Dawn will then spend almost five weeks spiraling out from the giant asteroid to the point at which Vesta will lose its gravitational hold on the spacecraft. That departure day is expected to be around August 26 (my birthday). Dawn will turn to view Vesta as it leaves and acquire more data. Then, Dawn will set its sights on the dwarf planet Ceres, and begin a two-and-a-half year journey to investigate the largest body in the main asteroid belt. Dawn will enter orbit around Ceres in 2015.

The Dawn mission to Vesta and Ceres is managed by the Jet Propulsion Laboratory (JPL), a division of the California Institute of Technology in Pasadena, for NASA's Science Mission Directorate, Washington D.C. UCLA is responsible for overall Dawn mission science. Dawn is a project of the directorate's Discovery Program, managed by NASA's Marshall Space Flight Center in Huntsville, Alabama. Orbital Sciences Corp. in Dulles, Virginia, designed and built the spacecraft. The German Aerospace Center, the Max Planck Institute for Solar System Research, the Italian Space Agency and the Italian National Astrophysical Institute are international partners on the mission team. The Dawn framing cameras were developed and built under the leadership of the Max Planck Institute for Solar System Research, Katlenburg-Lindau, Germany, with significant contributions by DLR German Aerospace Center, Institute of Planetary Research, Berlin, and in coordination with the Institute of Computer and Communication Network Engineering, Braunschweig. The Framing Camera project is funded by the Max Planck Society, DLR, and NASA/JPL. The California Institute of Technology in Pasadena manages JPL for NASA.

To view the new Vesta images and for more information about Dawn, visit: www.nasa.gov/dawn and dawn.jpl.nasa.gov .