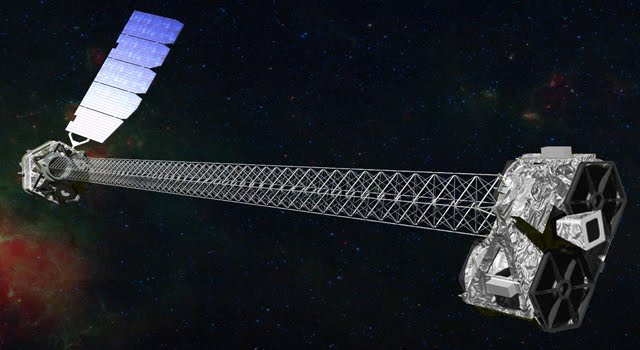 The above image is an artist's concept of NuSTAR in orbit with its 33-foot (10-meter) mast deployed, separating the optics module (right) from the detectors in the focal plane (left). Image Credit: NASA/JPL-Caltech

NASA's Nuclear Spectroscopic Telescope Array (NuSTAR) is one step closer to operational. On Thursday, June 21 at 1:43 PM EDT (10:43 AM PDT), nine days after launch, engineers at NuSTAR's mission control at UC Berkeley in California sent a signal to the spacecraft to start extending the 33-foot (10-meter) mast, a stable, rigid structure consisting of 56 cube-shaped units. Driven by a motor, the mast steadily inched out of a canister as each cube was assembled one by one. The process took about 26 minutes. Engineers and astronomers cheered seconds after they received word from the spacecraft that the mast was fully deployed and secure.

The NuSTAR team will now begin to verify the pointing and motion capabilities of the satellite, and fine-tune the alignment of the mast. In about five days, the team will instruct NuSTAR to take its "first light" pictures, which are used to calibrate the telescope.

Wait. Why such a long mast?

The answer has to do with the fact that X-rays behave differently than the visible light we see with our eyes. Sunlight easily reflects off surfaces, giving us the ability to see the world around us in color. X-rays, on the other hand, are not readily reflected: they either travel right through surfaces, as is the case with skin during medical X-rays, or they tend to be absorbed, by substances like your bone, for example. To focus X-rays onto the detectors at the back of a telescope, the light must hit mirrors at nearly parallel angles; if they were to hit head-on, they would be absorbed instead of reflected.

On NuSTAR, this is accomplished with two barrels of nested mirrors, each containing 133 shells, which reflect the X-rays to the back of the telescope. Because the reflecting angle is so shallow, the distance between the mirrors and the detectors is long. This is called the focal length, and it is maintained by NuSTAR's mast.

The fully extended mast is too large to launch in the lower-cost rockets required for relatively inexpensive Small Explorer class missions like NuSTAR. Instead NuSTAR launched on its Orbital Science Corporation (OSC) Pegasus XL rocket tucked inside a small canister. This rocket isn't as expensive as its bigger cousins because it launches from the air, with the help of a carrier plane, OSC's Lockheed L-1011 Stargazer.

Once science operations begin, NuSTAR will observe some of the hottest, densest and most energetic objects in the universe, including black holes, their high-speed particle jets, ultra-dense neutron stars, supernova remnants and our sun. It will observe high-energy X-rays with much greater sensitivity and clarity than any mission flown to date. Among its several goals, NuSTAR will address the puzzle of how black holes and galaxies evolve together over time.