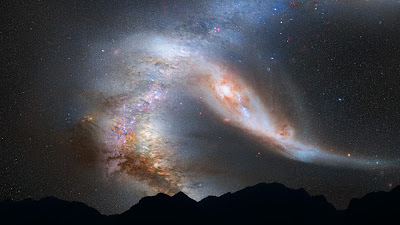 The above image is an artist’s depiction of night sky just before the predicted merger, about 3.75 million years from now, between our Milky Way galaxy and the neighboring Andromeda galaxy (Messier 31 / NGC 224). Andromeda's disk fills the field of view and its gravity begins to create tidal distortions in the Milky Way. The view is inspired by dynamical computer modeling of the future collision between the two galaxies. Image Credit: NASA, ESA, Z. Levay and R. van der Marel (STScI), and A. Mellinger

On Thursday, May 31, NASA astronomers announced they had confirmed the prediction that the Andromeda galaxy (Messier 31 / NGC 224) would indeed collide with our Milky Way galaxy in about 4 billion years. Astronomers predict that the sun will be flung into a new region of our galaxy, but Earth and our solar system will not be destroyed.

The confirmation came through painstaking NASA Hubble Space Telescope measurements of the motion of Andromeda. The galaxy is now 2.5 million light-years away, but it is falling toward the Milky Way under the mutual pull of gravity.

Computer simulations derived from Hubble's data show that it will take an additional two billion years after the encounter for the interacting galaxies to completely merge under the tug of gravity and reshape into a single elliptical galaxy similar to the kind commonly seen in the local universe.

Although the galaxies will plow into each other, stars inside each galaxy are so far apart that they will not collide with other stars during the encounter. However, the stars will be thrown into different orbits around the new galactic center. Simulations show that our solar system will probably be tossed much farther from the galactic core than it is today.

To complicate things even more, Andromeda’s small companion, the Triangulum galaxy, Messier 33, will join in the collision and perhaps later merge with the Andromeda/Milky Way pair. There is a small chance that Triangulum will hit the Milky Way first.

The universe is expanding and accelerating, and collisions between galaxies in close proximity to each other still happen because they are bound by the gravity of the dark matter surrounding them. The Hubble Space Telescope's deep views of the universe show such encounters between galaxies were more common in the past when the universe was smaller.

Tell me a story, Daddy…

A century ago astronomers did not realize that Messier 31 was a separate galaxy far beyond the stars of the Milky Way. Edwin Hubble measured its vast distance by uncovering a variable star that served as a "milepost marker." Hubble went on to discover the expanding universe in which galaxies are rushing away from us, but it has long been known that Messier 31 is moving toward the Milky Way at about 250,000 miles per hour, fast enough to travel from here to the Moon in one hour. The measurement was made using the Doppler Effect, which is a change in frequency and wavelength of waves produced by a moving source relative to an observer, to measure how starlight in the galaxy has been compressed by Andromeda's motion toward us.

The Hubble Space Telescope (HST) was carried into orbit by the Space Shuttle Discovery in April 1990. HST is a 2.4-meter (7.9 ft) aperture telescope in low Earth orbit, Hubble's four main instruments observe in the near ultraviolet, visible, and near infrared. The telescope is named after the astronomer Edwin Hubble. HST was built by NASA, with contributions from the European Space Agency (ESA), and is operated by the Space Telescope Science Institute. The HST is one of NASA's Great Observatories, along with the Compton Gamma Ray Observatory, the Chandra X-ray Observatory, and the Spitzer Space Telescope. The HST mission websites are: hubble.nasa.gov/ and asd.gsfc.nasa.gov/archive/hubble/ and hubblesite.org/