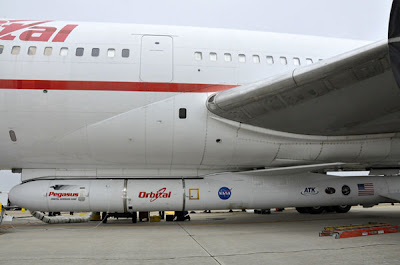 The above image shows the three-stage Orbital Sciences Corporation (OSC) Pegasus XL rocket with the NuSTAR spacecraft (hidden) strapped to the nose. The Pegasus XL is mounted to the belly of the OSC's Lockheed L-1011 Stargazer launch aircraft. This image was taken before the Stargazer departed Vandenberg Air Force Base for Kwajalein Atoll in the central Pacific Ocean . Photo Credit: NASA/Randy Beaudoin, VAFB

This is the day, folks! NASA's Nuclear Spectroscopic Telescope Array (NuSTAR) is scheduled to launch into low-Earth orbit.

This morning, no earlier than 11:30 AM EDT (8:30 AM PDT), NuSTAR will be launched above Kwajalein Atoll in the central Pacific Ocean. NuSTAR will be the first space telescope to create sharp images of X-rays with high energies, similar to those used by doctors and dentists. It will conduct a census for black holes, map radioactive material in young supernovae remnants, and study the origins of cosmic rays and extreme physics around collapsed stars.

Currently, NuSTAR is strapped to an Orbital Science Corporation (OSC) Pegasus XL rocket. This, in turn, is mounted to the belly of OSC's Lockheed L-1011 Stargazer launch aircraft. Why? So NuSTAR can be flown to a high altitude by Stargazer and then carried by the Pegasus XL the rest of the way to orbit. Plane-assisted launches are less expensive than those that take place from the ground. Less fuel is needed to boost cargo away from the pull of Earth's gravity. This profile of launch works well for NASA's Small Explorer program, which develops focused science missions at relatively low costs. And NuSTAR is part of the Small Explorer program.

Beginning at 10 AM EDT (7 AM PDT), live commentary and coverage will be broadcast online at www.nasa.gov/nustar and at www.ustream.tv/nasajpl2 .

NuSTAR has a four-hour launch window. If everything goes well for a launch at the opening of the window (pun intended), here is a breakdown of the possible timeline.

T - 1 hour: Takeoff - The Stargazer carrier aircraft, with the three-stage Pegasus XL and NuSTAR spacecraft strapped to its belly, will take off from Kwajalein's Bucholz Auxiliary Airfield and climb to an altitude of about 39,000 feet (11,900 meters). This should occur around 10:30 AM EDT (7:30 AM PDT).

T - 0 seconds: Drop Launch - The Stargazer will release the Pegasus XL rocket at 11:30 AM EDT (8:30 AM PDT). The rocket will free-fall for about five seconds before igniting.

T + 1 minute 32.05 seconds: Second Stage Ignition - the second-stage motor will burn for about a minute-and-a-half.

T + 2 minutes 8.3 seconds: Payload Fairing Separation - While the second stage is burning, pyrotechnic devices will be fired to release the nose cone, or fairing, that encapsulates the observatory. NuSTAR will then be exposed to space for the first time.

T + 13 minutes: Separating From the Rocket / Phoning Home - At about 8:43 a.m. PDT (11:43 a.m. EDT), NuSTAR will separate from the third stage. At this point, NuSTAR will be in its final orbit — a low-Earth equatorial orbit at an altitude of approximately 340 miles (600 kilometers) and an inclination of six degrees. At this point, NuSTAR's system that controls its orientation in space, or "attitude," will begin to stabilize it, and the spacecraft solar arrays will be deployed. Around this time, its first signal will be received on the ground via NASA's Tracking and Data Relay Satellite System. Over the following week, NuSTAR personnel will perform a series of checkouts to ensure that all spacecraft subsystems are operating nominally.

T + approximately 7 days: Deploying the Boom - Roughly one week after launch, engineers will command NuSTAR to deploy its lengthy 33-foot (10-meter) boom, allowing the telescope to focus X-ray light into crisp images. Unlike visible-light telescopes, X-ray telescopes require a long distance between the mirrors and detectors to focus the light. It's a bit like wearing glasses a few feet away from your face.

A video showing a previous Pegasus launch is online at www.nasa.gov/multimedia/videogallery/index.html?media_id=128352201 .