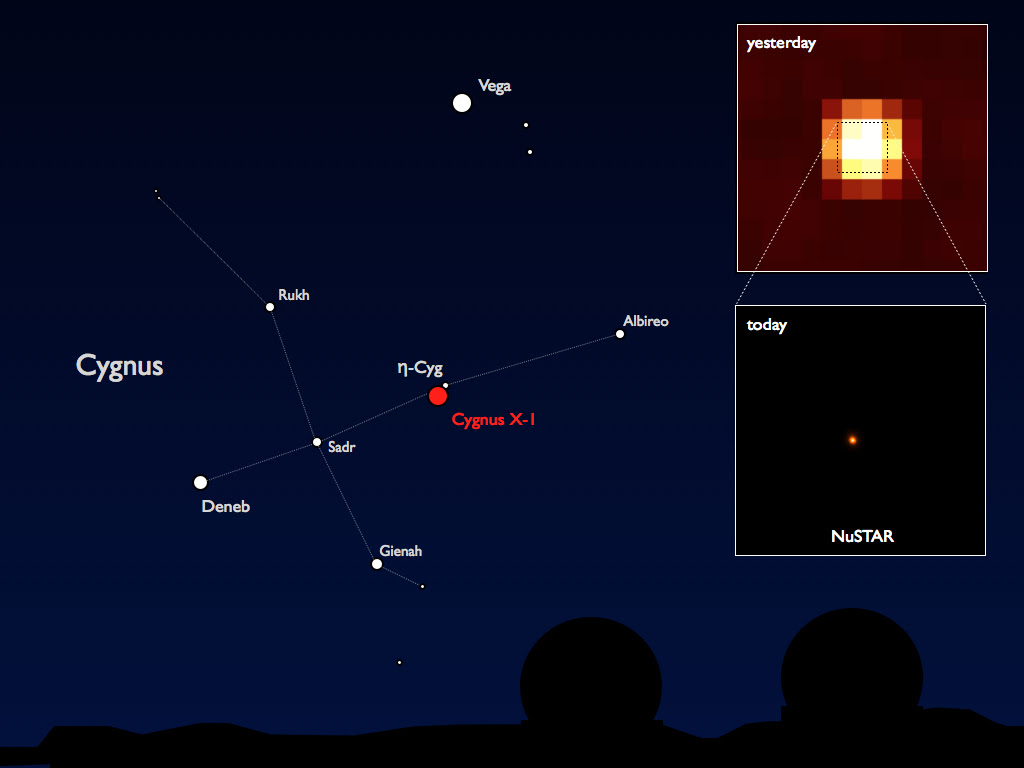 In the above image, lower inset at right is a high-energy X-ray view of the black hole Cygnus X-1 in the constellation Cygnus. The upper inset is a 1-degree-across X-ray image of the black hole taken by the INTEGRAL high-energy telescope. The rest of the image is a graphic of the constellation Cygnus, the Swan above the horizon. Image Credit: NASA/JPL-Caltech

We have "first light!" On Thursday, June 28th, NASA's Nuclear Spectroscopic Telescope Array (NuSTAR) took its first high-energy X-ray test images. Launched into low-Earth orbit June 13th, NuSTAR is the first space telescope with the ability to focus high-energy X-rays. The mission will soon begin its exploration of hidden black holes and other sites of extreme physics in our cosmos.

NuSTAR has begun obtaining the first-ever focused images of the high-energy X-ray universe. In contrast to previously-orbited X-ray missions, NuSTAR is similar to putting on a pair of glasses in order to see the world of high-energy X-rays in focus for the first time.

NuSTAR's lengthy mast, which provides the telescope mirrors and detectors with the distance needed to focus X-rays, was deployed on June 21st. The NuSTAR team then spent a week verifying the pointing and motion capabilities of the satellite, and fine-tuning the alignment of the mast.

The first images from the observatory show Cygnus X-1, a black hole in our galaxy, about 6,000 light-years from Earth, that is siphoning gas off a giant-star companion. Cygnus X-1 was chosen as a first target because it is extremely bright in X-rays, allowing the NuSTAR team to easily see where the telescope's focused X-rays are falling on the detectors.

In the next two weeks, the team will point at two other bright calibration targets: G21.5-0.9, the remnant of a supernova explosion that occurred several thousand years ago in our own Milky Way galaxy; and 3C 273, an actively feeding black hole, or quasar, located 2 billion light-years away at the center of another galaxy in the constellation Virgo. These targets will be used to make a small adjustment to place the X-ray light at the optimum spot on the detector, and to further calibrate and understand the telescope in preparation for future science observations.

Other X-ray observatories, including NASA's Swift and Chandra space telescopes, and the European Space Agency's XMM-Newton, will look at 3C 273 in coordination with NuSTAR, helping to further calibrate the telescope. The mission's primary observing program is expected to commence within two weeks.

Throughout its two-year prime mission, NuSTAR will turn its focused gaze on the most energetic objects in the universe, producing images with 100 times the sensitivity and 10 times the resolution of its predecessors operating at similar wavelength ranges. It will take a census of black holes both inside and outside of our Milky Way galaxy, and answer questions about how this enigmatic cosmic "species" behaves and evolves. Because it sees high-energy X-rays, NuSTAR will also probe farther into the dynamic regions around black holes, where matter is heated to temperatures as high as hundreds of millions of degrees, and will measure how fast black holes are spinning.

Other targets for the mission include the burnt-out remains of dead stars, such as those that exploded as supernovae; high-speed jets; the temperamental surface of our sun; and the structures where galaxies cluster together like mega-cities.