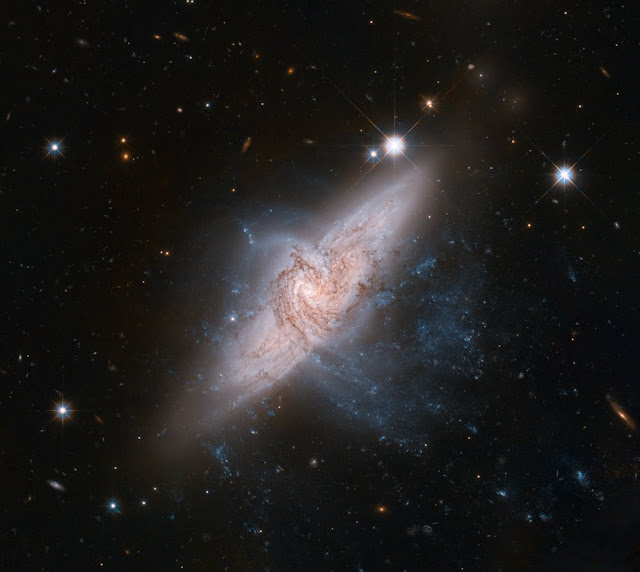 The above image is a composite of filtered exposures taken by the Advanced Camera for Surveys (ACS) aboard NASA's Hubble Space Telescope. The subject of the image is NGC 3314. In this image, North is to the top and East is to the left. Image Credit: NASA, ESA, the Hubble Heritage Team (STScI/AURA)-ESA/Hubble Collaboration, and W. Keel (University of Alabama)

But if you were to say you were looking at a textbook example of colliding galaxies, you would be wrong. NGC 3314 is, in fact, a pair of aligned spiral galaxies. Back in April of of 1999, two astronomers from the University of Alabama were in the process of searching for overlapping galaxies. They imaged this area of the sky in greater detail than previously, and were the first to learn what we now see in better clarity.

The distance to NGC 3314a is roughly 117 million light-years (35 Mpc).The distance to NGC 3314b is roughly 140 million light-years (42 Mpc). The unique alignment of the two galaxies gives astronomers the opportunity to measure the properties of interstellar dust in the face-on foreground galaxy (NGC3314a), which appear dark and silhouetted against the background galaxy (NGC 3314b). The motion of the two galaxies indicates that they are both relatively undisturbed and that they are moving in markedly different directions. The above image was released June 14th.