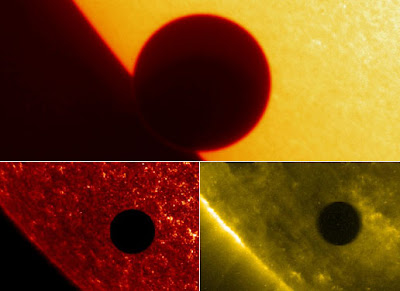 Above are three close-up images from a transit of the planet Venus across the face of the sun. The top image shows Venus on the eastern limb of the Sun. The faint ring around the planet comes from the scattering of its atmosphere, which allows some sunlight to show around the edge of the otherwise dark planetary disk. The faint glow on the disk is an effect of the TRACE telescope. The bottom left image is in the ultraviolet, and the bottom right image is in the extreme ultraviolet. The three images were captured by NASA's Sun-observing TRACE spacecraft. Image Credit: NASA/LMSAL

It's here! It's here! The transit of Venus is occurring later today over June 5 and 6, depending on where you are viewing in the world.

If you're in the western Pacific, eastern Asia and eastern Australia, you'll get a great view of the entire event. North and Central America, and northern South America get the beginning of the transit on June 5, but the sun will set before the event ends. Conversely, Europeans, as well as those watching in western and central Asia, eastern Africa and western Australia will get a glimpse at the tail end.

BUT REMEMBER: You should never, never look at the sun directly, even with binoculars or a telescope, because you could severely damage your eyes or even go blind. There are special filtering materials that, when used correctly, allow you to view the sun safely. If you do not have these, or you are not certain how to use them, do not take chances. Instead, view the sun using a projection method.

There are officially approved solar filtering materials that, when used properly, will allow you to view the sun. But if you don't have these, or you are not completely comfortable in using them. PLEASE DO NOT TAKE CHANCES! You can still view the transit in other ways.

If you have binoculars or a telescope, you may use them to project an image onto a card or other flat surface for viewing. If you do not have a telescope or binoculars, no worries! You can still enjoy the event using a pinhole camera that you can make yourself, cheaply and easily. JPL Education has created a wonderful page, compete with pictures, that walks you through the entire project.

"How to Make a Pinhole Camera." JPL Education, NASA/JPL-Caltech: www.jpl.nasa.gov/education/index.cfm?page=341

Transits of Venus are the rarest of all predictable astronomical phenomena and currently occur in a pattern that repeats every 243 years, with pairs of transits eight years apart separated by long gaps of 121.5 years and 105.5 years. Before 2004, the last pair of transits of Venus were in December 1874 and December 1882. The first of the latest pair of transits occurred on June 8, 2004. After this one, the next pair of Venus transits will not occur until December 2117 and December 2125. If you have the opportunity, you should definitely have a look for yourself. To learn more about the transit of Venus, visit these links.