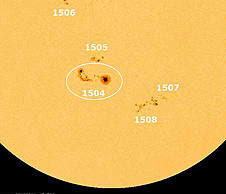 The above image of the sun shows the very  Active Region 1504, which has been so since rotating into view June 10th. Image Credit: SDO/HMI

Since it came around the left limb of the sun on June 10, Active Region 1504 (AR 1504) has been just that.  An now it has produced two M-class solar flares and two coronal mass ejections (CMEs). But before we proceed, lets make sure everyone is comfortable with some terminology.

To review, a solar flare is an explosion on the sun that occurs when the energy stored in twisted magnetic fields (usually above sunspots) is suddenly released. Flares produce a burst of radiation across the electromagnetic spectrum, from radio waves to X-rays and gamma-rays.

A coronal mass ejection (CME) is a massive burst of solar wind, plasma, and magnetic fields rising above the solar corona or being released into space.

CMEs are often associated with other forms of solar activity, most notably solar flares, but a causal relationship between the two has not been established. Most CMEs originate from active regions on Sun's surface, such as groupings of sunspots associated with frequent flares. Near a solar maximum — the period of greatest activity in a solar cycle — the sun produces about three CMEs every day, whereas near a solar minimum — the period of least activity in a solar cycle — there is about one CME every five days.

Oh, yes. The region AR 1504 fired off two M-class flares and two CMEs on June 13th and June 14th. The first flare lasted for a relatively long three hours, peaking on June 13th at 9:17 AM EDT. The associated CME traveled at approximately 375 miles per second and is directed toward Earth, though due to its slow speed, the effect on Earth is expected to be minimal.

The second M-class flare was also a long-duration flare, and it peaked on June 14th at 10:08 AM EDT. The CME associated with this flare is traveling much faster – preliminary analysis at Goddard's Space Weather Center indicates it is traveling at speeds of approximately 800 miles per second. It is traveling toward Earth, and could also impact Mars and the Spitzer spacecraft.

Current models estimate that both CMEs will arrive on June 16th. Please stay tuned for more details as we learn them.

To learn more about the sun and to stay current on solar activity, visit the mission home page of Solar Dynamics Observatory (SDO), sdo.gsfc.nasa.gov/ .