Most Quasars are Snackers, It Seems 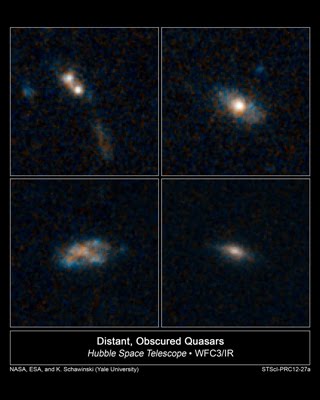 The above image is actually a collection of four, each showing a galaxy with dust surrounding them. Each has a quasar within that cannot be seen by the Hubble Space Telescope, but can be seen in the infrared by the Spitzer Space Telescope. Of the four, only the galaxy at the upper left shows signs of a collision. The images were taken by Hubble's Wide Field Camera 3 between 2011 and 2012. Image Credit: NASA, ESA, and K. Schawinski (Yale University)

According to observations from NASA's Spitzer and Hubble space telescopes, black holes in the early universe needed just a few snacks, rather than one giant meal, to fuel their quasars and help them grow.

A quasi-stellar radio source, abbreviated as "quasar," is a very energetic and distant active galactic nucleus. Quasars are extremely luminous and were first identified as being high redshift sources of electromagnetic energy, including radio waves and visible light, that were point-like, similar to stars, rather than extended sources similar to galaxies.

The nature of quasars was controversial until the early 1980s. There is now a scientific consensus that a quasar is a compact region in the center of a massive galaxy surrounding its central supermassive black hole. Its size is 10–10,000 times the Schwarzschild radius of the black hole. The quasar is powered by an accretion disc around the black hole.

Quasars are the brilliant beacons of light that are powered by black holes feasting on captured material, and in the process, heating some of the matter to millions of degrees.

Well why didn't you just say so? Please continue...

The brightest quasars reside in galaxies distorted by collisions with other galaxies. These encounters send lots of gas and dust into the gravitational whirlpool of hungry black holes.

But now, astronomers are uncovering an underlying population of fainter quasars that thrive in normal-looking spiral galaxies. They are triggered by black holes snacking on such tasty treats as a batch of gas or the occasional small satellite galaxy.

A census of 30 quasar host galaxies conducted with two of NASA's premier observatories, Hubble and Spitzer, has found that 26 of the host galaxies bear no telltale signs of collisions with neighbors, such as distorted shapes. Only one galaxy in the sample shows evidence of an interaction with another galaxy. The galaxies existed roughly 8 to 12 billion years ago, during a peak epoch of black-hole growth.

The study, led by Kevin Schawinski of Yale University, New Haven, Connecticut, bolsters evidence that the growth of most massive black holes in the early universe was fueled by small, long-term events rather than dramatic short-term major mergers.

While the quasars produced by galaxy collisions are very bright, the quasars in this study were more typical and much less luminous. The brilliant quasars born of galaxy mergers get all the attention, but the typical quasars are where most of the black-hole growth is happening. They are the norm, and they don't need the drama of a collision to shine.

Schawinski's science paper has been accepted for publication in a letter to the Monthly Notices of the Royal Astronomical Society. The periodical may be read online at this URL: www.wiley.com/WileyCDA/WileyTitle/productCd-MNR.html

For his study, Schawinski analyzed galaxies observed by the Spitzer and Hubble telescopes in the Cosmic Assembly Near-infrared Deep Extragalactic Legacy Survey. He chose 30 dust-enshrouded galaxies that appeared extremely bright in infrared images taken by the Spitzer telescope, a sign that their resident black holes are feasting on surrounding material. The dust is blocking the quasar's light at visible wavelengths. But infrared light pierces the dust, allowing Schawinski to study the galaxies' detailed structure. The masses of those galaxies are comparable to that of our Milky Way.

Schawinski then studied the galaxies in near-infrared images taken by Hubble's Wide Field Camera 3. Hubble's sharp images allowed careful analysis of galaxy shapes, which would be significantly distorted if major galaxy mergers had taken place and were disrupting the structure. He found that in all but one instance, the galaxies show no such disruption.

Whatever process is feeding the quasars, it's below the detection capability of even Hubble. Schawinski thinks the process is a combination of such things as random stirring if gas, supernovae blasts, swallowing of small bodies, and streams of gas and stars feeding material into the nucleus.

A black hole doesn't need much gas to satisfy its hunger and turn on a quasar. According to Schawinski, there's more than enough gas within a few light-years from the center of our Milky Way to turn it into a quasar. It just doesn't happen. But it could happen if a small cloud of gas ran into the black hole. Random motions and stirrings inside the galaxy would channel gas into the black hole. Schawinski noted that ten billion years ago, those random motions were more common and there was more gas to go around. Small galaxies also were more abundant and were swallowed up by larger galaxies.

The galaxies in Schawinski's study are prime targets for NASA's upcoming James Webb Space Telescope, a large infrared observatory scheduled to launch later this decade. Schawinski notes that, while Hubble and Spitzer have been trailblazers in finding these quasars in non-collision galaxies, he thinks the Webb telescope is needed to understand the kinds of events that power them.

The Spitzer Space Telescope (SST) was launched August 2003 aboard a Delta II rocket. Spitzer is an infrared space observatory, the fourth and final of the NASA Great Observatories program. The observatory was renamed in honor of Lyman Spitzer, one of the 20th century's great scientists. The mission website is: www.spitzer.caltech.edu/