The Mismatched Offspring of Kepler-36 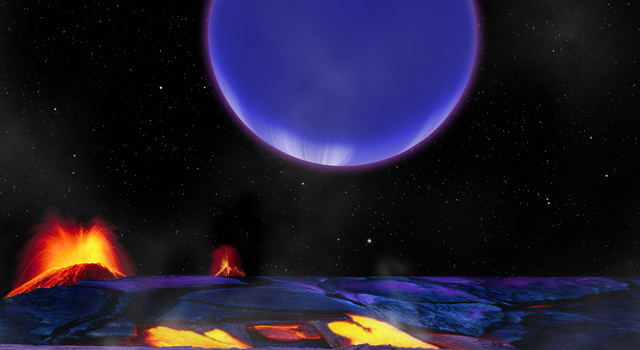 The above image is an artist's conception showing Kepler-36c as it might look from the surface of neighboring Kepler-36b. Image Credit: Harvard-Smithsonian Center for Astrophysics

Astronomers have discovered a pair of neighboring planets with dissimilar densities orbiting very close to each other. The planets are too close to their star to be in the so-called "habitable zone," the region in a star system where liquid water might exist on the surface, but they do have the closest orbits between two planets ever confirmed. The findings appeared June 21st in the journal Science. The journal may be viewed online at the URL: www.sciencemag.org .

The research team was led by Josh Carter, a Hubble fellow at the Harvard-Smithsonian Center for Astrophysics in Cambridge, Massachusetts, and Eric Agol, a professor of astronomy at the University of Washington in Seattle. The team used data from NASA's Kepler space telescope, which measures dips in the brightness of more than 150,000 stars, to search for planets.

The system's inner planet, Kepler-36b, orbits its host star every 13.8 days. The outer planet, Kepler-36c, orbits every 16.2 days. On their closest approach, the pair come within about 1.2 million miles (1.9 million kilometers) of each other. This is only five times the Earth-moon distance and about 20 times closer to each other than any two planets in our solar system.

You can read more about the discovery by reading the news releases of the Harvard-Smithsonian Center for Astrophysics, www.cfa.harvard.edu and University of Washington, www.washington.edu .

Ball Aerospace and Technologies Corp. in Boulder, Colo., developed the Kepler flight system and supports mission operations with the Laboratory for Atmospheric and Space Physics at the University of Colorado in Boulder.

The Space Telescope Science Institute in Baltimore archives, hosts and distributes Kepler science data. Kepler is NASA's 10th Discovery Mission and is funded by NASA's Science Mission Directorate at the agency's headquarters in Washington. The California Institute of Technology manages JPL for NASA.

For more information about the Kepler mission, visit: http://www.nasa.gov/kepler.

You can learn more about exoplanets and NASA's planet-finding program at http://planetquest.jpl.nasa.gov