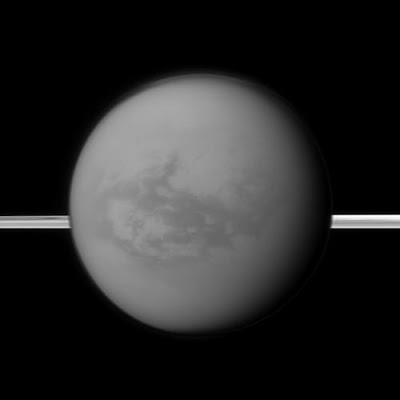 In the above image, Saturn's rings lie in the distance as the Cassini spacecraft looks toward Titan and its dark region called Shangri-La, east of the landing site of the Huygens Probe. Image Credit: NASA/JPL-Caltech/Space Science Institute

To be clear, Saturn's largest moon is colder than Earth. It has an average temperature of 93.7 K (−179.5 °C). The atmosphere is mostly nitrogen with some methane mixed in, a little more methane at the surface than in the upper layers.The surface pressure of Titan is 146.7 kPa, or about 1.45 times that of sea-level on Earth. At those pressures and temperatures, the methane can behave like water on Earth, evaporating in warmer regions, raining from the sky in colder ones, and pooling in depressions to form methane lakes. Within that understanding of Titan's ecosystem, let's press on...

NASA's Cassini spacecraft continues to see shallow, standing lakes of methane on the surface of Titan in the "tropics" — the latitudes immediately north and south of Titan's equator. One of the tropical lakes appears to be about half the size of Utah's Great Salt Lake, with a depth of at least 3 feet (1 meter).

The result, which is a new analysis of Cassini data, is unexpected because models had assumed the long-standing bodies of liquid would only exist at the poles. The findings appear in this week's issue of the journal Nature.

Where could the liquid for these lakes come from? The mission team suggests that an one likely supplier is an underground aquifer. Basically, Titan could have oases.

Understanding how lakes or wetlands form on Titan helps scientists learn about the moon's weather. Like Earth's hydrological cycle, Titan has a "methane" cycle, with methane rather than water circulating. In Titan's atmosphere, ultraviolet light breaks apart methane, initiating a chain of complicated organic chemical reactions. But existing models haven't been able to account for the abundant supply of methane.

An aquifer could explain one of the puzzling questions about the existence of methane, which is continually depleted. Methane is a progenitor of Titan's organic chemistry, which likely produces interesting molecules like amino acids, the building blocks of life.

Global circulation models of Titan have theorized that liquid methane in the moon's equatorial region evaporates and is carried by wind to the north and south poles, where cooler temperatures cause methane to condense. When it falls to the surface, it forms the polar lakes. On Earth, water is similarly transported by the circulation, yet the oceans also transport water, thereby countering the atmospheric effects.

The latest results come from Cassini's visual and infrared mapping spectrometer, which detected the dark areas in the tropical region known as Shangri-La, near the spot where the European Space Agency's Huygens probe landed in 2005. When Huygens landed, the heat of the probe's lamp vaporized some methane from the ground, indicating it had landed in a damp area.

Areas appear dark to the visual and infrared mapping spectrometer when liquid ethane or methane are present. Some regions could be shallow, ankle-deep puddles. Cassini's radar mapper has seen lakes in the polar region, but hasn't detected any lakes at low latitudes.

The tropical lakes detected by the visual and infrared mapping spectrometer have remained since 2004. Only once has rain been detected falling and evaporating in the equatorial regions, and only during the recent expected rainy season. Scientists therefore deduce the lakes could not be substantively replenished by rain.

Mission team scientists had thought Titan's system was more simple, with extensive dunes at the equator and lakes at the poles. Now they see that Titan is more complex. Going forward, they will pay closer attention to the Cassini spacecraft's passing of Titan in order to see how the details are filled in.

The Cassini-Huygens mission is a cooperative project of NASA, the European Space Agency and the Italian Space Agency. The Jet Propulsion Laboratory, a division of the California Institute of Technology in Pasadena, manages the mission for NASA's Science Mission Directorate, Washington. The Cassini orbiter and its two onboard cameras were designed, developed and assembled at JPL. The imaging team is based at the Space Science Institute, Boulder, Colorado. The visual and infrared mapping spectrometer team is based at the University of Arizona, Tucson.

Like what you see? Let me know! Email: RoamingAstroInput@gmail.com
-
Posted by James M. Thomas at 4:00 AM