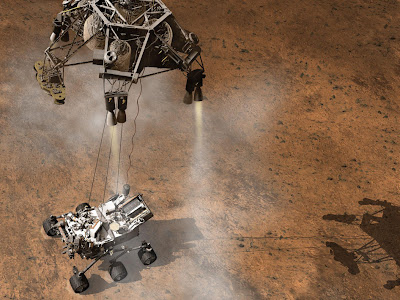 The above image is an artist's concept, depicting the moment that NASA's Mars Science Laboratory (Curiosity rover) touches down onto the Martian surface. Image Credit: NASA/JPL-Caltech

Listen up, friends! If you have been curious about the progress of Curiosity and the Mars Science Laboratory (MSL) mission. This is your lucky day!

Today, June 11th, at noon EDT (9 AM PDT) NASA will host a media teleconference, to provide a status update on the August 5th, landing of MSL, the most advanced rover sent to Mars to-date.

Launched November 26, 2011, NASA's Mars Science Laboratory spacecraft and Curiosity rover are on track for landing the evening of August 5, 2012, PDT (early on August 6, Universal Time and EDT) to begin a two-year prime mission. Researchers plan to use Curiosity to study layers in Gale Crater's central mound, Mount Sharp. The mission will investigate whether the area has ever offered an environment favorable for microbial life. The panelists for today's teleconference include:

Audio of today's event will be streamed live online at www.nasa.gov/newsaudio .

NASA's Jet Propulsion Laboratory, a division of the California Institute of Technology, Pasadena, manages the mission for NASA's Science Mission Directorate in Washington. More information about Curiosity is online at www.nasa.gov/msl and mars.jpl.nasa.gov/msl . You can follow the mission on Facebook at: www.facebook.com/marscuriosity and on Twitter at: www.twitter.com/marscuriosity .