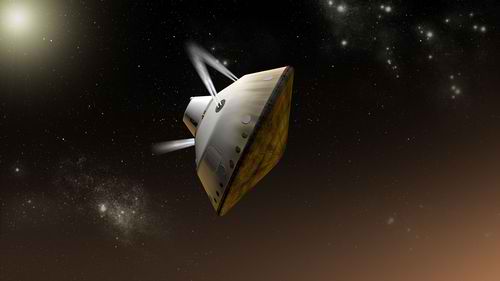 The above image is an artist's concept of NASA's Mars Science Laboratory (MSL) with thrusters firing during the entry, descent and landing phase. Image Credit: NASA/JPL-Caltech

The video is entitled, "Challenges of Getting to Mars: Curiosity's Seven Minutes of Terror." Now, doesn't that title grab your attention? Hollywood could learn a thing or two from the MSL mission team. I'm just sayin'.

The video reviews the mission from the point of entry into the Martian atmosphere, to the point of landing the Curiosity rover on the surface. The video also considers the point of view of the mission team members, who can only wait until the automated landing completes, whether successfully or unsuccessfully. Its a real nail biter — the video as well as the actual event. Check it out and tell your friends.

The MSL rover Curiosity is scheduled to land at approximately 1:31 AM EDT, August 6 (10:31 PM PDT, August 5). Following checkout operations, Curiosity will begin a two-year study of whether the landing vicinity ever offered an environment favorable for microbial life.

Launched November 26, 2011, NASA's Mars Science Laboratory (MSL) mission and Curiosity rover are on track for landing at approximately 1:31 AM EDT, August 6 (10:31 PM PDT, August 5) to begin a two-year prime mission. Researchers plan to use Curiosity to study layers in Gale Crater's central mound, Mount Sharp. The mission will investigate whether the area has ever offered an environment favorable for microbial life.
NASA's Jet Propulsion Laboratory, a division of the California Institute of Technology in Pasadena, manages the mission for the NASA Science Mission Directorate, Washington.