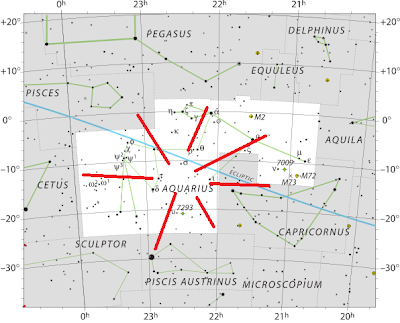 The above image is a chart of the constellation Aquarius, presented by the International Astronomical Union (IAU). The location of the radiant point of the Southern Delta Aquarid meteor shower is indicated by the radiating red lines. Image Credit: IAU and Sky & Telescope magazine (Roger Sinnott & Rick Fienberg)

This Saturday and Sunday, July 28th and 29th, mark the peak of the Southern Delta Aquarid meteor shower. The peak of this shower can produce about 20 meteors per hour, but a smaller rate can also be seen from July 18th through August 18th. The radiant point for this shower is in the constellation Aquarius, the Water Bearer.

This shower is not as famous as other annual meteor showers, but the Southern Delta Aquarids are reliable. This year, Observers will have to set their alarm clock to get the most out of this celestial event.

The moon will set after midnight local time and the darkest skies are the best time to catch the shooting stars. So, from about 1:00 AM local time until dawn will be the best time to watch. And a dark viewing location, away from the light pollution of cities, is also a must.

Because of the location in the sky of the constellation Aquarius, the Southern Delta Aquarids favor observers in southern latitudes in the northern hemisphere and all of the southern hemisphere.

Meteors occur when Earth passes through the dust trail left by comet. And the identity of the parent comet for this shower has been a mystery. But some experts suggest one possibility is Comet 96P/Machholz, discovered by amateur astronomer Donald Machholz in 1986. This "dirty snowball" is currently in the neighborhood. It reached perihelion on July 14 and it will have its closest approach to Earth on August 1st (0.894 AU). At that time the comet should be at celestial coordinates (J2000) R.A. 11h 21m 08.8s Dec. +26d 10m 25s with a brightness of magnitude 10.31.

Some have suggested that, if 96P/Machholz is indeed the parent, wouldn't it be a one-in-a-lifetime experience to see both a meteor shower and its parent simultaneously! But depending where you are, don't let your inability to see one prevent you from at least trying to see the other. After all, in backyard astronomy, you make the most of what you have.