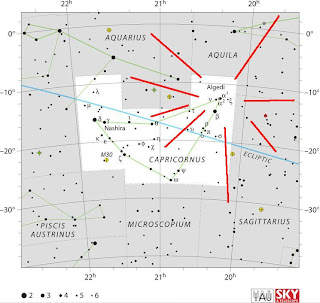 The above image is a chart of the constellation Capricornus, presented by the International Astronomical Union (IAU). The location of the radiant point of the Alpha Capricornid meteor shower is indicated by the radiating red lines. Image Credit: IAU and Sky & Telescope magazine (Roger Sinnott & Rick Fienberg)

Apologies, Dear Reader. This article was originally posted with wrong image. We are now re-posting with the correction. Please enjoy.

This Wednesday/Thursday, August 1st/2nd, marks the peak of the Alpha Capricornid meteor shower. Meteors from this shower will appear to originate from a point in the constellation of Capricornus (RA 20h 36m, Dec -10°).

The shower runs from July 15th through August 25th and has a rate of about 8 per hour. Though the rate is low, the shower features relatively bright meteors and some fireballs. And this fact is critical for observers this year, since the shower will be fighting a full moon sitting smack dab in the middle of the radiant. Observers, your best chance to see meteors is to avert your eyes from the bright moon and look toward a portion of the sky moving outward from the radiant. This observing method works better if you are observing with two or more people. In this way each of you can cover a different portion of the sky and keep each other verbally apprised of your sightings without taking your eyes off the meteoric prize. And even though you are dealing with a bright moon, please do your best to seek out a dark-sky location for your observing session.