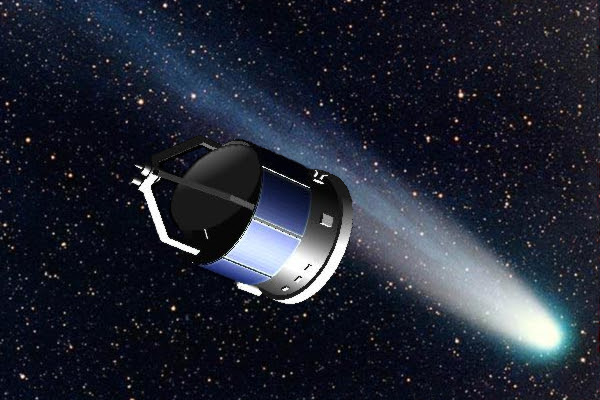 The above image is an artist's concept of the European Space Agency spacecraft Giotto approaching a comet. Image Credit: Andrzej Mirecki

Tuesday, July 10th, marks the 20th anniversary (July 10, 1992) of the European Space Agency's (ESA's) Giotto spacecraft with Comet Grigg-Skjellerup. Launched and manged by ESA, the Giotto mission was originally intended to fly by and study Halley's Comet. On March 13, 1986, Giotto succeeded in approaching Halley's nucleus at a distance of 596 kilometers. Following the flyby, on March 15th, Giotto was adjusted to an Earth flyby trajectory and its science instruments were turned off.

On July 2, 1990, when Giotto flew by Earth, it was commanded to wake up and walked through sling-shot maneuvers in order to investigate another comet. Specifically, Comet Grigg-Skjellerup.

On July 10, 1992, Giotto flew by Comet Grigg-Skjellerup at a distance of about 200 km. After the encounter, on July 23rd, Giotto was again turned off.

In 1999 Giotto made another Earth flyby, but was not reactivated. The Giotto mission was named after Italian painter and architect Giotto di Bondone (1266/7 - 1337). Better known simply as Giotto, he is generally considered the first in a line of great artists who contributed to the Italian Renaissance. In 1301 Giotto observed Hally's Comet and was inspired by his experience to depict Comet Halley as the star of Bethlehem in his painting painting Adoration of the Magi.

To learn more about the Giotto mission, visit this ESA summary page, sci.esa.int/science-e/www/area/index.cfm?fareaid=15 .