Hi-C is Go for Launch! 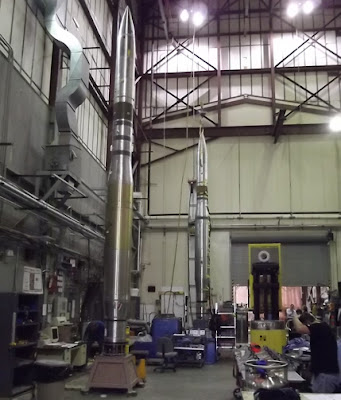 Today, July 11th, NASA will launch the highest resolution solar telescope ever to observe the solar corona, the million degree outer solar atmosphere. The solar telescope, called the High Resolution Coronal Imager (HI-C), will fly atop a Black Brant sounding rocket, launched from the White Sands Missile Range in New Mexico. The launch is scheduled for 12:50 PM MDT (2:50 PM EDT). This mission is a sub-orbital flight, lasting just 620. For about half of that time (381 seconds) HI-C will be high enough so that Earth's atmosphere will not block ultraviolet rays from the sun. By looking at a specific range of UV light, HI-C mission scientists hope to observe fundamental structures on the sun, as narrow as 100 miles across.

Mission scientists note that other instruments currently flying cannot resolve objects to this detail, but they do suggest – after detailed computer analysis of the amount of light in any given pixel – that structures in the sun's atmosphere – the chromosphere and the corona – are about 100 miles across. The scientists also have theories about the shapes of these structures. The mission team is excited because HI-C will have the first chance to see them.

The spatial resolution on HI-C is about five times more detailed than the Atmospheric Imaging Assembly (AIA) instrument on the Solar Dynamics Observatory (SDO), that can resolve structures down to 600 miles and currently sends back some of our most stunning and scientifically useful images of the sun. Of course, AIA can see the entire sun at this resolution, while HI-C will focus on an area just one-sixth the width of the sun or 135,000 miles across. Also, AIA observes the sun in ten different wavelengths, while HI-C will observe just one: 193 Angstroms. This wavelength of UV light corresponds to material in the sun at temperatures of 1.5 million Kelvin and that wavelength is typically used to observe material in the corona.

During its ten-minute journey, HI-C will focus on the center of the sun, where sunspot activity was predicted to be – a prediction based on what the sun looked like 27 days previously, since it takes 27 days for the sun to complete a full rotation. Of course, we now know this prediction worked very well, since the center of the disc currently features three active regions: AR 1520, AR 1521 and AR 1519.

HI-C will start acquiring data at 69 seconds after launch, at a rate of roughly an image a second. But the flight will not just be an automated one. Scientists will be able to look through a secondary H-alpha telescope on the instrument in real time and re-point the main telescope as needed.

In addition to seeing the finest structures yet seen in the sun’s corona, the launch of HI-C will serve as a test bed for this high-resolution telescope. Often one improves telescope resolution simply by building bigger mirrors, but this is not possible when constraining a telescope to the size of a sounding rocket, or even a long-term satellite. So HI-C's mirror is only about nine and a half inches across, no bigger than that of AIA. However, the HI-C mirrors, made by a team at NASA's Marshall Space Flight Center, are some of the finest ever made. If one could see the mirror surface at an atomic level, it would show no greater valleys or peaks than two atoms in either direction.

In addition, the team created the instrument to have a longer focal length – that is, they increased the distance the light travels from its primary mirror to its secondary mirror, another trick to improve resolution – by creating a precise inner maze for the light to travel from mirror to mirror, rather than a simple, shorter straight line.

NASA's Marshall Space Flight Center is leading the international effort for Hi-C. Key partners include the University of Alabama at Huntsville, Smithsonian Astrophysical Observatory, University of Central Lancashire in Lancashire, England, and the Lebedev Physical Institute of the Russian Academy of Sciences.

To read more about this flight, visit these URLs: