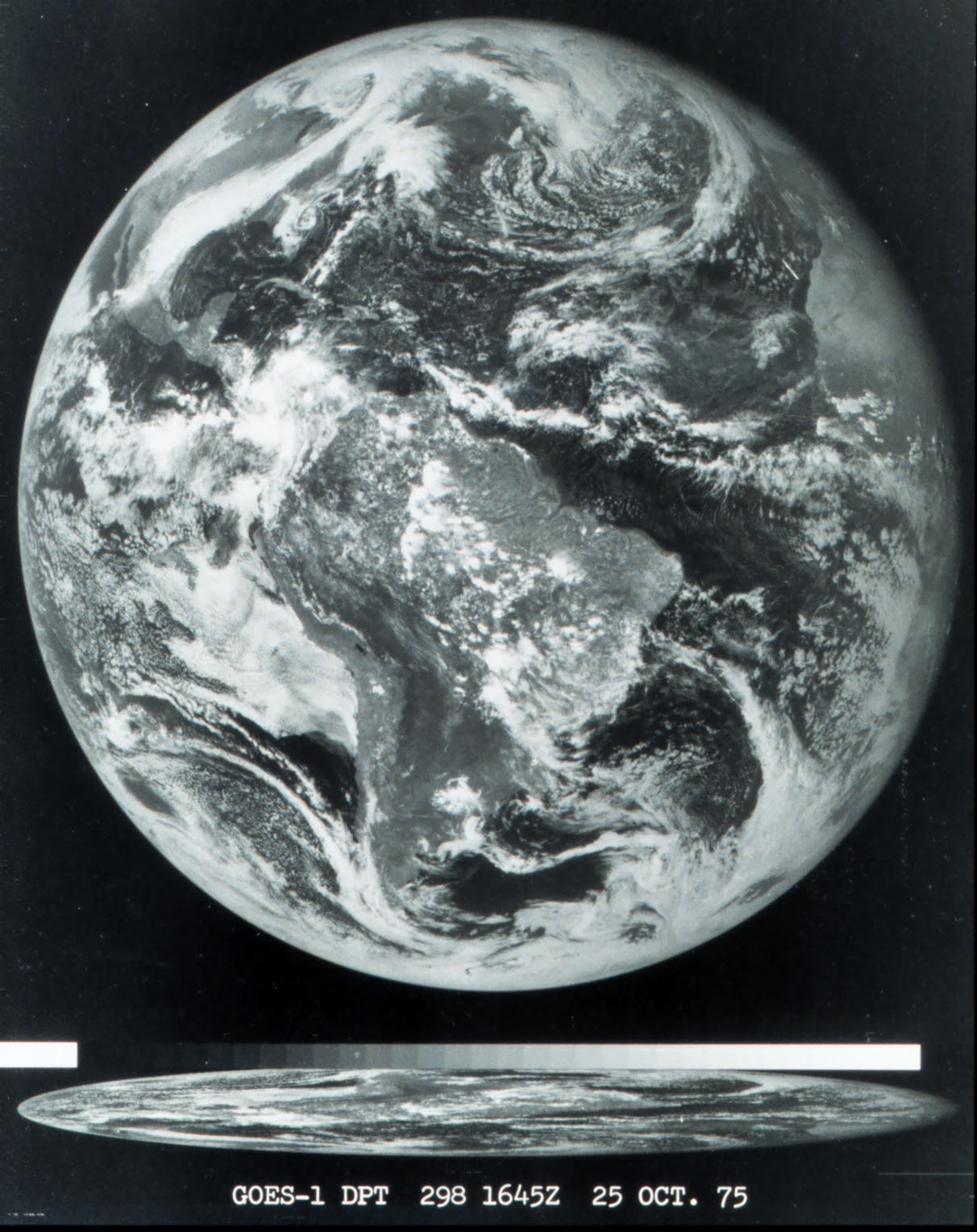 The above image was taken October 25, 1975 from 22,000 miles above Earth by the first Geostationary Operational Environmental Satellite (GOES) of the Geostationary Satellite system. Image Credit: NOAA

We hear a lot about the GOES satellites and we get a lot of good information from them. But what exactly are they and is their full purpose? I thought we'd take a few minutes to find out, and to appreciate all that they do...

GOES is an abbreviation for Geostationary Operational Environmental Satellite, those satellites actively participating in the Geostationary Satellite system. The system is operated by the United States National Environmental Satellite, Data, and Information Service (NESDIS). The system supports weather forecasting, severe storm tracking, and meteorology research. Spacecraft and ground-based elements of the system work together to provide a continuous stream of environmental data. The National Weather Service (NWS) uses the GOES system for its United States weather monitoring and forecasting operations, and scientific researchers use the data to better understand land, atmosphere, ocean, and climate interactions.

The GOES system uses geosynchronous satellites, which have been a basic element of U.S. weather monitoring and forecasting since the launch in 1974 of the first Synchronous Meteorological Satellite, SMS-1.

There are normally three active GOES satellites at any given time. When in service, their operational designations are GOES-East (eastern North America and the Atlantic), GOES-West (western North America and the Pacific), and GOES-South (South America). Those satellites that are replaced by a newer model but still functional, are re-purposed. For example, GOES-3 is currently used as a communications relay for the South Pole research station.

The Generations of GOES
Satellites SMS-1, SMS-2, GOES 1, GOES 2, and GOES 3 (SMS-A through SMS-C/GOES-A, GOES-B through GOES-c) were essentially identical in design. They were build on a spaceframe provided by Philco-Ford. They were spin-stabilized. they carried (1) a visible infrared spin-scan radiometer (VISSR) which provided high-quality day/night cloudcover data and made radiance temperatures of the earth/atmosphere system, (2) a meteorological data collection and transmission system which relayed processed data from central weather facilities to small APT-equipped regional stations and collected and retransmitted data from remotely located earth-based platforms, and (3) a space environmental monitor (SEM) which measured proton, electron, and solar X-ray fluxes and magnetic fields. The cylindrically shaped spacecraft measured 190.5 cm in diameter and 230 cm in length, exclusive of a magnetometer that extended an additional 83 cm beyond the cylinder shell. The primary structural members were a honeycombed equipment shelf and a thrust tube. The VISSR telescope was mounted on the equipment shelf and viewed the earth through a special aperture in the side of the spacecraft. A support structure extended radially out from the thrust tube and was affixed to the solar panels, which formed the outer walls of the spacecraft and provided the primary source of electrical power. Located in the annulus-shaped space between the thrust tube and the solar panels were station-keeping and dynamics control equipment, batteries, and most of the SEM equipment. Proper spacecraft attitude and spin rate (approximately 100 rpm) were maintained by two separate sets of jet thrusters mounted around the spacecraft equator and activated by ground command. The spacecraft used both UHF and S-band frequencies in its telemetry and command subsystem. A low-power VHF transponder provided telemetry and command during launch and then served as a backup for the primary subsystem once the spacecraft had attained synchronous orbit.

Satellites GOES 4, GOES 5, GOES 6, GOES-G, and GOES 7 (GOES-D through GOES-H) were slightly different in design, but otherwise identical to the prior satellites in instrumentation and capabilities. Though they were not the first to be designated GOES, the satellites of this design are described as the "first generation" GOES design. These were constructed by Hughes Space and Communications.


Satellites GOES 8, GOES 9, GOES 10, GOES 11, and GOES 12 (GOES-I through GOES-M) were the "second generation" design  This series is a joint effort on the part of NASA and NOAA to provide continued operational monitoring of weather systems primarily over the United States, distribute meteorological data to regional and national weather offices within the USA, contribute to the development of an environmental data collection network, contribute to the search and rescue program, improve the capability for forcasting and provide real-time warnings of solar distrubances, and to extend knowledge and understanding of atmospheric processes to improve short and long-term weather forecasts. The GOES-NEXT series, extends the capabilities of the previous GOES 1-7 spacecraft. The GOES I-M spacecraft will be placed over the equator at 135 deg West or 75 deg West. The spacecraft structure is based on the Space Transportation System (STS)-launched, three-axis stabilized Insat (geostationary satellite for India) meteorological satellite design. The design allows unobstructed views of the Earth for operational coverage by the spacecraft sensors. The spacecraft configuration is a compact box-shaped main body that carries the Earth-observing instruments, a continuous-drive solar array attached to the south panel through a yoke assembly, and a solar pointing instrument gimbal mounted on the solar panel yoke. The main body accomodates the sensors, electronics, and support subsystems. The communication antennas, except the Tracking, Telemetry, and Command (TT&C) antenna, are hard-mounted to the Earth-facing panel. The Propulsion Module consists of the fuel and oxidizer tanks for the bipropellant propulsion subsystem mounted on the central cylinder. The Attitude and Orbit Control Substem (AOCS) provides attitude control of the spacecraft. The AOCS consists of the sensors, electronics, and the actuators. The GOES power is generated from the solar array and two 12 A-hr batteries. Power is automatically regulated during solar eclipses. The Image Navigation/Registration (INR) system provides Imager and Sounder data products in real-time to users. The Communications, Command, and Data Handling subsystem is comprised of antennas, receivers, transponders, transmitters, data encoders and encryptors and multiplexers. The Tracking Telemetry and Command (TT&C) subsystem provides the necessary monitor and command link between the spacecraft and the ground stations. The GOES-NEXT instruments consist of the following: (1) Earth Imaging System, a 5-channel visible and infrared radiometer which provides Earth imagery 24 hours a day; (2) Sounding System, a 19-channel discrete-filter radiometer for obtaining atmospheric temperature and moisture soundings; (3) a Space Environment Monitor (SEM), which consists of a magnetic field sensor, a solar X-ray sensor, an energetic particle sensor (EPS), and a High Energy Proton and Alpha Detector (HEPAD); (4) a Search and Rescue subsystem (SARSAT), which receives signals from 406 MHz distress beacons and relays them to the ground; (5) a Data Collection System (DCS) for collecting and relaying real-time information from Data Collection Platforms (DCPs) such as buoys, balloons, remote weather stations, ships, and aircraft; and (6) a Weather Facsimile (WEFAX) system which relays processed weather imagary from the Wallops Island station to the user community. These satellies were constructed by Space Systems/Loral.

Satellites GOES 13, GOES 14, GOES 15, and GOES 16 (GOES-N through GOES-Q) are the "third generation" of GOES satellites, constructed by Boeing (the contract was awarded to Hughes prior to their merger with Boeing). The satellites carry an imager, sounder, the Solar X-ray Imager (SXI), the Space Environment Monitor System (SEM) and a search and rescue transponder which relays distress signals to the ground. The SEM consists of two magnetometers; an Energetic Particle Sensor (EPS) composed of a High-Energy Proton and Alpha Detector (HEPAD), a Magnetosphere Electron Detector (MAGED), an Energetic Proton Electron and Alpha Detector (EPEAD), and a Magnetosphere Proton Detector (MAGPD); Energetic X-Ray Sensor (XRS) and Extreme Ultraviolet (EUV) sensors.

The "fourth generation," also called the GOES-R series of spacecraft, is in the development phase and will be constructed by Lockheed Martin. The first GOES-R series satellite is scheduled for launch in fiscal year 2015 and is expected to remain operational through December 2027.

History and Status of SMS/GOES Satellites

GOES 7 - Launched April 28, 1987 as GOES-H. A ground spare, it replaced GOES 5. Filled a vital role as both GOES-East and GOES-West during the wait for GOES-I to be ready. Once GOES 8 became GOES-East, GOES 7 resumed its role as GOES-West. Currently used as a communications satellite by Peacesat.

GOES 10 - Launched April 25, 1997 as GOES-K. Place on orbit as a spare. In late 1988, replaced GOES 9 as GOES-West. Replaced by GOES 11 and later served as a backup for GOES-South. Also served temporarily as GOES-East, filling in for defective GOES 8. Decommissioned/deactivated on December 2, 2009.

To learn more about the work of the GOES satellite system, visit www.oso.noaa.gov/goes