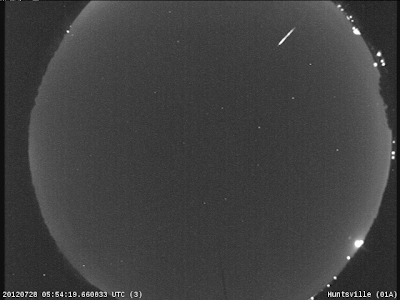 The above image is an overlapping of multiple frames of a July 28th fireball. Its passing was captured by camera "Huntsville (01A)" of NASA's All Fireball Network, taken July 28th at 05:54 UTC. Image Credit: NASA

Well, if anyone had doubts about the parentage of the Southern Delta Aquarid meteor shower, they may have just been swept away. It looks like 96P/Machholz has paternity (or is it maternity?).

Over the evening of July 27th-28th, NASA's All Fireball Network (fireballs.ndc.nasa.gov) detected 17 fireballs over North America with the brightness of Venus (currently magnitude -4.6). And what's more, at least half of these meteors had projected orbits corresponding with that of Comet 96P/Machholz, discovered by amateur astronomer Donald Machholz in 1986.