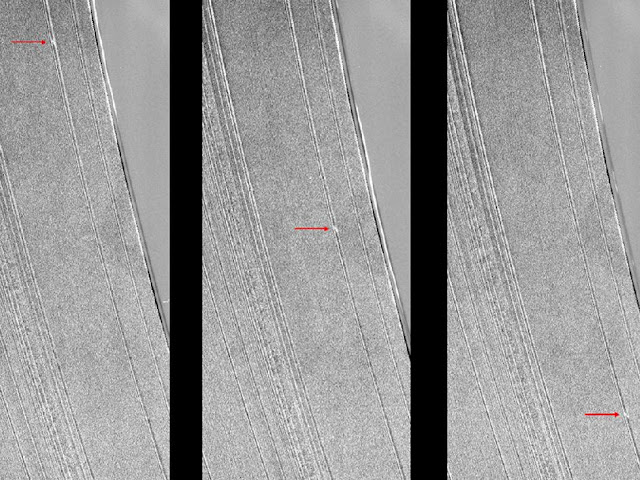 The above composite of three images, taken by the Cassini spacecraft, show a propeller-shaped structure created by an unseen moon in Saturn's A ring. Scientists are seeing these propellers and other details of Saturn's rings for the first time in two years. Cassini's orbit took the spacecraft out of Saturn's equatorial plane in the spring of 2012, making face-on views of the rings possible again. Image Credit: NASA/JPL-Caltech/SSI/Cornell

For years scientists have tracked within Saturn's A ring a propeller-shaped structure created by an unseen moon. This propeller, marked with red arrows of these Cassini images. These are part of a growing catalogue of "propeller" moons that, despite being too small to be seen, enhance their visibility by creating larger disturbances in the surrounding fabric of Saturn's rings.

This particular propeller is nicknamed "Sikorsky," after Russian-American aviator Igor Sikorsky. It is about 30 miles (50 kilometers) long. To learn more about propellers, see these three images:

In this most recent image composite, scientists knew they were observing a propeller they had seen before because Sikorsky was found close to the location predicted by a simple model of its motion. But its actual location did trail the predicted location by 6 degrees of longitude (8,000 miles, or 13,000 kilometers), underlining some of the changes known to occur in the orbits of propeller moons. These changes may occur because of interactions between the rings and the propeller moons. Scientists are eager to understand these interactions in Saturn's rings, as they may hold a key to similar systems such as solar systems forming from disks of matter.

In this most recent image, Sikorsky was found to trail its predicted position by 6 degrees of longitude (8,000 miles, or 13,000 kilometers), a discrepancy that underlines the changes that are known to occur in the orbits of propeller moons, possibly due to interactions between the rings and the embedded moons. Scientists are eager to understand these interactions in Saturn's rings, as they may hold a key to similar systems such as solar systems forming from disks of matter.

The Encke Gap of Saturn's A ring is on the right in the images. The A ring is the outermost of Saturn's main rings. This view looks toward the northern, sunlit side of the rings from about 12 degrees above the ringplane.

These images have not been cleaned of the effects of cosmic rays that struck the camera's sensor during exposure. These cosmic ray hits appear as small white specks or streaks on the images. These specks are not features in Saturn's rings. The image has been enhanced to aid visibility of compact objects like the propeller. The enhancement makes the edge of the Encke Gap appear dashed.

The images were taken in visible light with the Cassini spacecraft narrow-angle camera on June 5, 2012. The view was obtained at a distance of approximately 236,000 miles (380,000 kilometers) from Saturn and at a sun-Saturn-spacecraft, or phase, angle of 24 degrees. The image scale is 1 mile (2 kilometers) per pixel.

And now, the mission details...

The Cassini-Huygens mission is a cooperative project of NASA, the European Space Agency and the Italian Space Agency. The Jet Propulsion Laboratory (JPL), a division of the California Institute of Technology in Pasadena, manages the mission for NASA's Science Mission Directorate, Washington, D.C. The Cassini orbiter and its two onboard cameras were designed, developed and assembled at JPL. The imaging operations center is based at the Space Science Institute in Boulder, Colorado.
For more information about the Cassini-Huygens mission visit www.nasa.gov/cassini and saturn.jpl.nasa.gov .