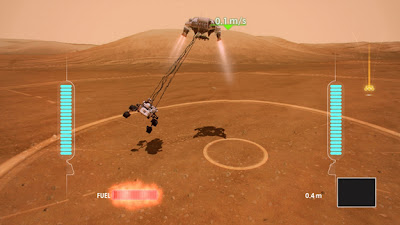 The above image is a screenshot from the new Microsoft Xbox Mars Rover Landing Game. Image Credit: Microsoft/Smoking Gun

On August 5th, NASA's Mars Science Laboratory (MSL)/Curiosity rover will enter the Marian atmosphere and the mission team will experience the seven seconds of terror while the spacecraft performs the automated landing.

But if you are a Microsoft Xbox gamer, you don't have to wait until August 5th. Microsoft and NASA have collaborated to create the Kinect-based Mars Rover Landing game, in which you control the whole landing experience using your body and face. The game is available in the Xbox Live Marketplace and in a special destination on the Xbox Live dashboard dedicated to the Curiosity rover. The game allows players to use the Kinect motion sensor on the Xbox 360 console to land NASA's Curiosity rover on Mars.

Launched November 26, 2011, NASA's Mars Science Laboratory (MSL) / Curiosity rover is on track for landing at approximately 1:31 AM EDT, August 6 (10:31 PM PDT, August 5) to begin a two-year prime mission. Researchers plan to use Curiosity to study layers in Gale Crater's central mound, Mount Sharp. The mission will investigate whether the area has ever offered an environment favorable for microbial life.

NASA's Jet Propulsion Laboratory, a division of the California Institute of Technology in Pasadena, manages the mission for the NASA Science Mission Directorate, Washington.