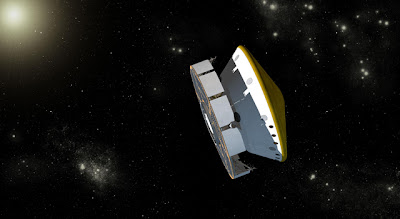 The above image is an artist's concept of NASA's Mars Science Laboratory (MSL) spacecraft during its cruise phase between launch and final approach to Mars. The spacecraft includes a disc-shaped cruise stage (on the left) attached to the aeroshell. The spacecraft's rover (Curiosity) and descent stage are tucked inside the aeroshell. Image credit: NASA/JPL-Caltech

The spacecraft will deliver the mission's car-size rover, Curiosity, to a landing target inside Gale Crater and near the central peak, formerly known as "Mount Sharp," but recently named "Aeolis Mons" by the International Astronomical Union (IAU). The landing is scheduled to occur at about 10:31 PM PDT on August 5th (1:31 AM EDT on August 6th). Upon landing, the Curiosity rover will begin its two-year prime mission studying whether the area has ever offered environmental conditions favorable for life.

The recent thruster burn shifted the atmosphere entry point by about 13 miles (21 kilometers) west, toward the target, and lowered the velocity by about one-fortieth of one mile per hour (one centimeter per second). Curiosity will enter Mars' atmosphere at a speed of about 13,200 mph (5,900 meters per second).

The descent through Mars' atmosphere and down to the surface will employ techniques that allow for a combination of a smaller target area and a heavier landed payload, than were possible for any previous Mars mission. These innovations, if successful, will place a well-equipped mobile laboratory into a locale especially well-suited for its mission of discovery.

As of July 30th, the MSL spacecraft had carried the rover Curiosity had traveled about 343 million miles (555 million kilometers) of its 352-million-mile (567-million-kilometer) flight to Mars.