Dawn and Vesta, the Long Goodbye 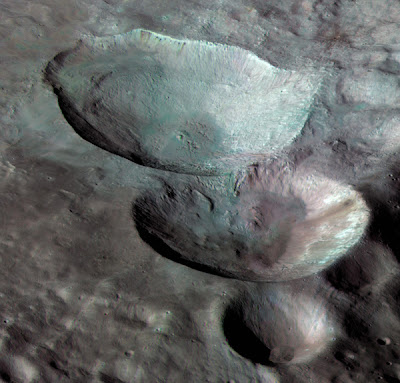 The above image shows the three touching impact craters of different sizes on Vesta's surface, that are reminiscent of the shape of a snowman. This feature is one of Vesta's most striking. North is to the lower right in this orientation. Image Credit: NASA/JPL-Caltech/UCLA/MPS/DLR/IDA

On July 30th, the chief engineer for NASA's Dawn mission, Marc Rayman, reported that Dawn had completed the final phase of its exploration of Asteroid 4 Vesta. On July 25th at 9:45 AM PDT (12:45 PM EDT), the Dawn spacecraft cranked up its ion propulsion system and began its gradual, month-long departure. Dawn is basically reversing the process it followed into orbit last year.

The last major study was the second high-altitude mapping orbit (HAMO2), in which Dawn imaged Vesta's surface on the day side and then transmitted data back to Earth while on the night side, repeating this cycle every 12.3 hours — the length of each Vesta orbit during that phase. This process allowed Dawn to gather full coverage of Vesta's illuminated surface every five days.

The mission team reports that Dawn worked flawlessly in its tasks and was able to map the surface six times — with more than 4,700 images. Two of the imaging passes were vertical and four of the passes were angled, allowing the mission team to create three dimensional images when the perspectives are combined.

The first high-altitude mapping orbit (HAMO1) ran from September through October 2011. But Vesta has seasons, of a sort, and running this second mapping will allow the mission team to compare the data and note the specific differences in the seasons on Vesta.

In addition to the images, Dawn obtained nearly nine million spectra (over twice the amount of HAMO1) with its visible and infrared mapping spectrometer (VIR). These will allow scientists to learn about the nature of Vesta's minerals.

Dawn's low altitude mapping orbit (LAMO) phase, between HAMO1 and HAMO2, allowed the mission team to more carefully study Vesta's gravity field and, from that, derive more information about Vesta's composition. The LAMO phase also Dawn's gamma ray and neutron detector (GRaND) to collect its best data on composition of Vesta's surface and subsurface. And the GRaND data gathering continued during HAMO2, adding to the wealth of Vesta information.

While Dawn is primarily focused on ion thrusting, it will stop four times during its ascent, to take Vesta surface images for navigational purposes, much in the same way the spacecraft did during its gradual descent into Vesta orbit last year.

The Dawn mission team expects that on August 26th (my birthday), Dawn will be far enough away from Vesta that its orbit will transition to a solar one. The little spacecraft will then officially begin the journey to dwarf planet Ceres, where it should arrive in February 2015.

NASA's Dawn mission to Vesta and Ceres is managed by the Jet Propulsion Laboratory (JPL), a division of the California Institute of Technology in Pasadena, for NASA's Science Mission Directorate, Washington D.C. UCLA is responsible for overall Dawn mission science. Dawn is a project of the directorate's Discovery Program, managed by NASA's Marshall Space Flight Center in Huntsville, Alabama. Orbital Sciences Corporation (OSC) in Dulles, Virginia, designed and built the spacecraft. The German Aerospace Center, the Max Planck Institute for Solar System Research, the Italian Space Agency and the Italian National Astrophysical Institute are international partners on the mission team. The Dawn framing cameras were developed and built under the leadership of the Max Planck Institute for Solar System Research, Katlenburg-Lindau, Germany, with significant contributions by DLR German Aerospace Center, Institute of Planetary Research, Berlin, and in coordination with the Institute of Computer and Communication Network Engineering, Braunschweig. The Framing Camera project is funded by the Max Planck Society, DLR, and NASA/JPL. The California Institute of Technology in Pasadena manages JPL for NASA.

To view the new Vesta images and for more information about Dawn, visit: www.nasa.gov/dawn and dawn.jpl.nasa.gov .