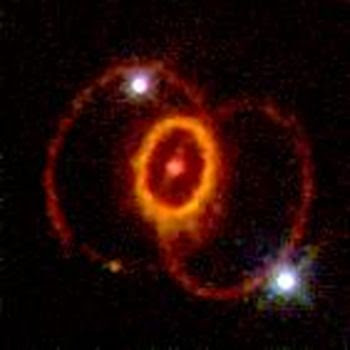 The above image shows Supernova 1987A, which exploded in February 1987. The image was taken February 1994 using the Wide Field Planetary Camera 2 aboard the Hubble Space Telescope. Image Credit: Dr. Christopher Burrows, ESA/STScI and NASA

We now continue our review of NASA's Nuclear Spectroscopic Telescope Array (NuSTAR) mission, which launched June 13th. One of the objectives of the mission is to map historic supernova remnants. But just what are these?...

The word nova is Latin for "new," and supernovae (the plural of supernova) were so named because the objects appeared to be new stars in the heavens. Of course, the name is actually a bit ironic, since supernovae are actually stars at the end of their lifecycle, stars that are going out with a bang, so to speak.

A supernova (SNe) is the instantaneous release of ~10^51 ergs (10^31 Megatons) of energy, the result of either the catastrophic collapse of a massive star or runaway nuclear burning on the surface of a white dwarf. Although only a small fraction of the energy is released in the form of visible light, this is enough to make it appear as if a new star has appeared in the sky. The effects of the SNe are profound and far-reaching, and it is possible to see the remains of SNe that occurred many hundreds of years ago.

The classification of SNe is an observational one. SNe are broken down into two groups based on the presence or absence of Hydrogen Balmer lines in their spectra at maximum brightness. Those without Balmer lines are classified as Type I SNe and those with Balmer lines are classified as Type II. Supernovae of Type I are further divided into Type Ia, Ib and Ic. Although the classification is a purely observational one, there are underlying similarities between the progenitor stars (Type Ia are understood to be low mass while Type Ib, Ic and II are high mass) that are responsible for the observed classes of SNe.

The Life and Death of a Star

A star is engaged in a continual struggle against collapse due to the gravitational force of its own mass. In the early stages of its life (the main sequence stage), a star resists gravity with thermal pressure, as the fusion of elements in its core releases energy which heats up the star's gas. The hot gas expands, exerting an outward pressure that balances the inward force of gravity. How this battle of gravity vs. outward pressure eventually concludes depends upon the initial mass of the star.

At some point in a massive star's life, the center of the star has been converted to iron and nuclear fusion in the core is no longer an exothermal process. Nuclear fusion ceases and, without this source of thermal pressure, gravity, exerting its inexorable pull on the star, seems to be winning the battle. The star continues its collapse. Then a strange reaction takes place during which electrons and protons are pushed so close together that they merge to become neutrons, releasing energy in the form of neutrinos. There is no available space between the neutrons: they are supported by neutron degenerate pressure. This halts the gravitational collapse and the outer, more tenuous stellar material 'bounces' upon hitting the degenerate core, much like a wave hitting a sea wall bounces back on itself. The conversion of the central core to neutrons releases 10^51 ergs of neutron binding potential energy, and after the bounce, the outer layers of the star are violently ejected into the ISM.

If the star starts with between 5 and 12 times the mass of our sun, the neutron degeneracy pressure in the core is thought to be able to withstand the gravitational pressure of the star remaining after the supernova explosion. In this case, a neutron star is left in the center of the SNR. If the neutron star is rotating, it may become a pulsar, emitting radiation in a beam which sweeps the earth as the pulsar rotates. If the star is massive enough, even neutron degenerate pressure will not be able to hold up against gravitational collapse, and the remains continue to be squeezed inward by gravity, forming a singularity, or black hole.

In the usual scheme of things, we expect low mass stars to settle down, slowly fizzle out and become white dwarfs. Their masses are too low to bring about the collapse to a neutron star and the resulting spectacle of a supernova explosion. They resist gravity's pull with electron degenerate pressure, where the electrons are squeezed until there is no more space between them. The gravitational pressure of the star is not enough to cause the conversion to neutrons and the star has reached a stable equilibrium. However, if the white dwarf is in a binary system with a red giant, it is possible for the dwarf to accrete matter from its companion. If enough matter falls on it that it exceeds the Chandresekar limit for white dwarfs, the star is no longer stable, gravity will overcome the resistance of electron degeneracy pressure and the star will collapse. The collapse raises the temperature until carbon and oxygen in the core start to fuse, igniting a deflagration wave of runaway nuclear burning which propagates through the core in seconds. The nuclear fusion reactions create about a solar mass of radioactive 56Ni. The energy released is on the order of 10^52 ergs, and the white dwarf is completely disrupted in the process. The star can outshine entire galaxies while the nuclear fusion proceeds. This is believed to be the mechanism for Type Ia SNe.

What is a Supernova Remnant (SNR)?

Most (99%) of the energy of a SNe is released in the form of energetic neutrinos; the remaining energy is converted into kinetic energy, accelerating the stellar material to speeds greater than the speed of sound and causing a shock wave to move outwards from the central star. The high velocity stellar material plows outwards into the ISM, compressing and heating ambient gas and sweeping it up much as a snow plow compacts and sweeps up snow. The ISM becomes enriched with the stellar material blown off in the explosion. The expanding material, and any additional material the blast collects as it travels through the interstellar medium, forms a supernova remnant (SNR).

Although in a simple model of SNRs the explosion energy is deposited evenly in all directions and the ambient material is swept up in a uniform, spherical shell, in reality, remnants are much more complicated. Small differences in the initial conditions of the progenitors, including previous mass ejections, can have important effects on ejecta propagation. External conditions, such as density enhancements, in the ISM in which the SN explodes can shape and mold the morphology of the remnant. And Rayleigh-Taylor instabilities can cause the surface of the forward shock to become rippled, mixing the ambient and stellar gases. It is not surprising that there are various types of SNR: simple  Shell type remnants  with nothing in their centers,  Crab-like remnants  or  plerions  with  pulsars  in their centers and  Composite remnants , a combination of the first two.

How does the SNR Evolve?

As the ejecta expand out from the star, it passes through the surrounding interstellar medium, heating it from 10^7 to 10^8 K, sufficient to separate electrons from their atoms and to generate thermal X-rays. The interstellar material is accelerated by the shock wave and will be propelled away from the supernova site at somewhat less than the shock wave's initial velocity. This makes for a thin expanding shell around the supernova site encasing a relatively low density interior.

While the material swept up by the shock is much less than the mass of the stellar ejecta, the expansion of the stellar ejecta proceeds at essentially a constant velocity equal to the initial shock wave speed, typically of the order of 10,000 km/s. This is known as the "free expansion" phase and may last for approximately 200 years, at which point the shock wave has swept up as much interstellar material as the initial stellar ejecta. The supernova remnant at this time will be about 10 light years in radius. Although the remnant is radiating thermal X-ray and synchrotron radiation across a broad range of the electromagnetic spectrum (from radio to X-rays), the initial energy of the shock wave will have diminished very little. Line emission from the radioactive isotopes generated in the supernovae contribute significantly to the total apparent brightness of the remnant in the early years, but do not significantly effect the shock wave.

As the remnant sweeps up ambient mass equal to the mass of the stellar ejecta, the wave will begin to slow and the remnant enters a phase known as adiabatic expansion, or the Sedov-Taylor or blast wave phase. The internal energy of the shock continues to be very large compared to radiation losses from thermal and synchrotron radiation, so the total energy remains nearly constant. The rate of expansion is determined solely the initial energy of the shock wave and the density of the interstellar medium.

As the shock wave cools, it will become more efficient at radiating energy. Once the temperature drops below 20000 K or so, some electrons will be able to recombine with carbon and oxygen ions, enabling ultraviolet line emission which is a much more efficient radiation mechanism than the thermal X-rays and synchrotron radiation. Hence this new phase is known as the radiative phase during which X-ray radiation becomes much less apparent and the remnant cools and disperses into the surrounding medium over the course of the next 10,000 years.

Supernova remnants are extremely important for our understanding of our Galaxy. They are the source of much of the energy that heats up the interstellar medium. They are believed to be responsible for the acceleration of galactic cosmic rays. Heavy elements (up to iron) created by fusion in the stellar core are dumped into the galaxy by the mixing of the ejecta and ISM material in the remnant. Enriched, heated gas from SNR material is reprocessed to form new stars. Elements heavier than iron are created in the powerful blast of a SN explosion and are then dredged up by the shock wave and mixed into the ISM. Most of the elements (except for Hydrogen) in your body, for example, are stellar material that has been redistributed in a SNR. Understanding how SNR evolve can thus help us to understand many important phenomena.

How Does X-ray Astronomy Fit in?

There are several mechanisms by which SNR generate X-rays. The ejecta, heated and compressed by the powerful forward shock, generates thermal and line emission in the X-ray region of the spectrum. Electrons, accelerated by the SNR shock to relativistic speeds emit synchrotron radiation when they change direction in the presence of a magnetic field. And a neutron star formed in a Type II SNe may also be a significant source of X-rays.

The X-rays emitted by SNR give us many clues that help us understand SNR, their progenitor stars, and their interaction with the ISM. We usually know little about the progenitor star, however, X-ray spectra of the shock heated ejecta in the remnant offer direct information about the composition of the progenitor star. X-ray spectra can also give information on the composition of the ISM into which the remnant is expanding, if and to what extent the elemental layers of the progenitor star are mixed with the gas of the ISM. By studying the X-ray morphologies of SNR, we can learn about how thermal conduction acts in SNR and in the ISM. Looking for X-ray synchrotron radiation is a way of getting direct evidence for cosmic ray acceleration in SNR shocks.

The hot material, the radioactive isotopes, free electrons moving in the strong magnetic field of the neutron star... all of these processes produce X-rays and gamma rays which reveal the nature of the SNR.