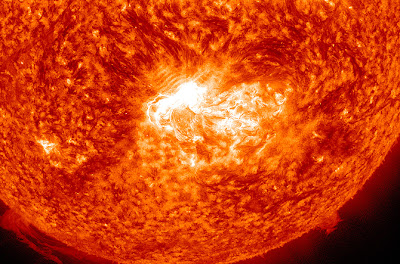 The above image was taken Thursday, July 12th, at 12:45 PM EDT by the Solar Dynamics Observatory (SDO). The image shows an X1.4 solar flare in progress. It was captured in the 304 Angstrom wavelength and it is colorized here in red. Image Credit: NASA/SDO/AIA

It appears we have more incoming, and this time from the big Active Region 1520 (AR 1520), which first rotated into view on July 6th. On Thursday, July 12th, the sun released a class X1.4 solar flare which began at 16:39 UTC (12:39 EDT), peaked at 16:42 UTC (12:42 EDT) and then suddenly dropped off. During the flare, the region produced a coronal mass ejection (CME) which appears to be heading in the direction of Earth.

According to a forecast track prepared by analysts at the Goddard Space Weather Lab, the CME will hit Earth on July 14th around 10:20 UT, give or take 7 hours (06:20 EDT, give or take...). The impact could spark strong geomagnetic storms. Sky watchers should be alert for auroras this weekend.

Solar protons accelerated by the blast are swarming around Earth. The radiation storm, in progress, ranks "S1" on NOAA space weather scales, which means it poses no serious threat to satellites or astronauts. This could change if the storm continues to intensify. Stay tuned...

To see other July 12th images as well as a SDO video of the flare, visit the NASA news release here, www.nasa.gov/mission_pages/sunearth/news/News071212-X1.4flare.html

To learn more about the sun and to stay current on solar activity, visit the mission home page of Solar Dynamics Observatory (SDO), sdo.gsfc.nasa.gov .