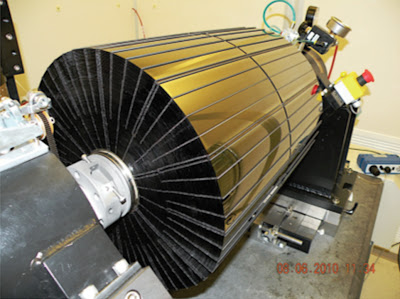 The above image shows one of two optics units which make up NuSTAR's telescope. Image Credit: NASA/JPL-Caltech

To register the image focused by the optics, NuSTAR requires high-energy X-ray detectors capable of measuring the position and energy of the incoming X-rays. In this case, the detectors are called focal-plane detectors because they reside where light from the telescope is focused. The detectors electronically register each X-ray interaction, building up an image over time. Similar to the digital detectors used in cell-phone cameras, these detectors are made of a crystalline material divided up into pixels, which absorb X-rays and in the process create an electronic signal. The challenge in making the NuSTAR detectors was to find a material dense enough and with the right properties to block penetrating high-energy X-rays. Further, very sensitive electronics had to be custom designed to accurately measure the tiny signals produced by X-ray interactions.

NuSTAR’s focal-plane detectors are manufactured from crystals of cadmium-zinc-telluride, a semiconductor material with the ability to stop high-energy X-rays. The detectors are printed with a 32 by 32 pattern of pixels. Each pixel is connected to an input on a low-noise readout chip designed for NuSTAR by the Caltech team. The readout chip measures the X-ray energy to better than one part in 60, which is important for looking for signatures of radioactivity in the remnants of exploded stars. Four of these detectors are placed in a two-by-two array to make up the 64 by 64 pixel focal plane.

The focal plane detectors are shielded by a well of material that is itself a particle and X-ray detector. These shields register high-energy photons and cosmic rays that impact the focal plane from directions other than along the NuSTAR optical axis. Such events are the primary background for NuSTAR and must be properly identified and subtracted to identify high-energy photons from cosmic sources. NuSTAR rejects background X-rays by ignoring any signal from a detector that occurs at the exact same time a background event is recorded on the shield.

The optics and detector technologies were successfully tested on a balloon-borne experiment, called the High Energy Focusing Telescope, in 2005. Fiona Harrison, the principal investigator of NuSTAR, was also the principal investigator of that project. Collaborating institutions were NASA, Caltech, Columbia University, the Danish Technical University and the Lawrence Livermore National Laboratory in Livermore, California.

Bridging the mirrors and the detectors is a mast, a little over 33 feet (10 meters) long. Because X-rays graze off the mirrors at nearly parallel angles, X-ray telescopes require long focal lengths (the distance between the optics and the detectors, or focal plane). NASA’s Chandra X-ray Observatory, which also has a 33-foot (10-meter) focal length, accomplishes this with a large, fixed structure, which required the space shuttle to launch. But NuSTAR is a NASA Small Explorer mission that must launch on a compact, low-cost rocket. The solution is an extendable mast, which is stowed in a canister approximately 3.3-feet (one-meter) tall during launch. About a week after launch, the mast will unfold, driven out by a motor in a process that takes about 25 minutes.

The articulated mast, built by ATK Aerospace Systems, Goleta, Calif., is based on a design used to establish a 197-foot (60-meter) separation between the two antennae of the Shuttle Radar Topography Mission (SRT M), which flew on the Space Shuttle Endeavour in February 2000 and made high-resolution elevation (topographic) maps of most of our planet. The mast is low weight, compact and provides a stiff and stable structure connecting the precisely aligned benches.

After the mast is deployed in space, scientists will check that the optics units and focal plane detectors are properly aligned. An adjustment mechanism is built into the mast, which allows for the alignment of the optics bench to be precisely altered if needed.

Tiny changes in the position of the mast will also occur throughout the mission. The structure is not perfectly rigid and undergoes slight thermal distortions, particularly when going in and out of Earth shadow.