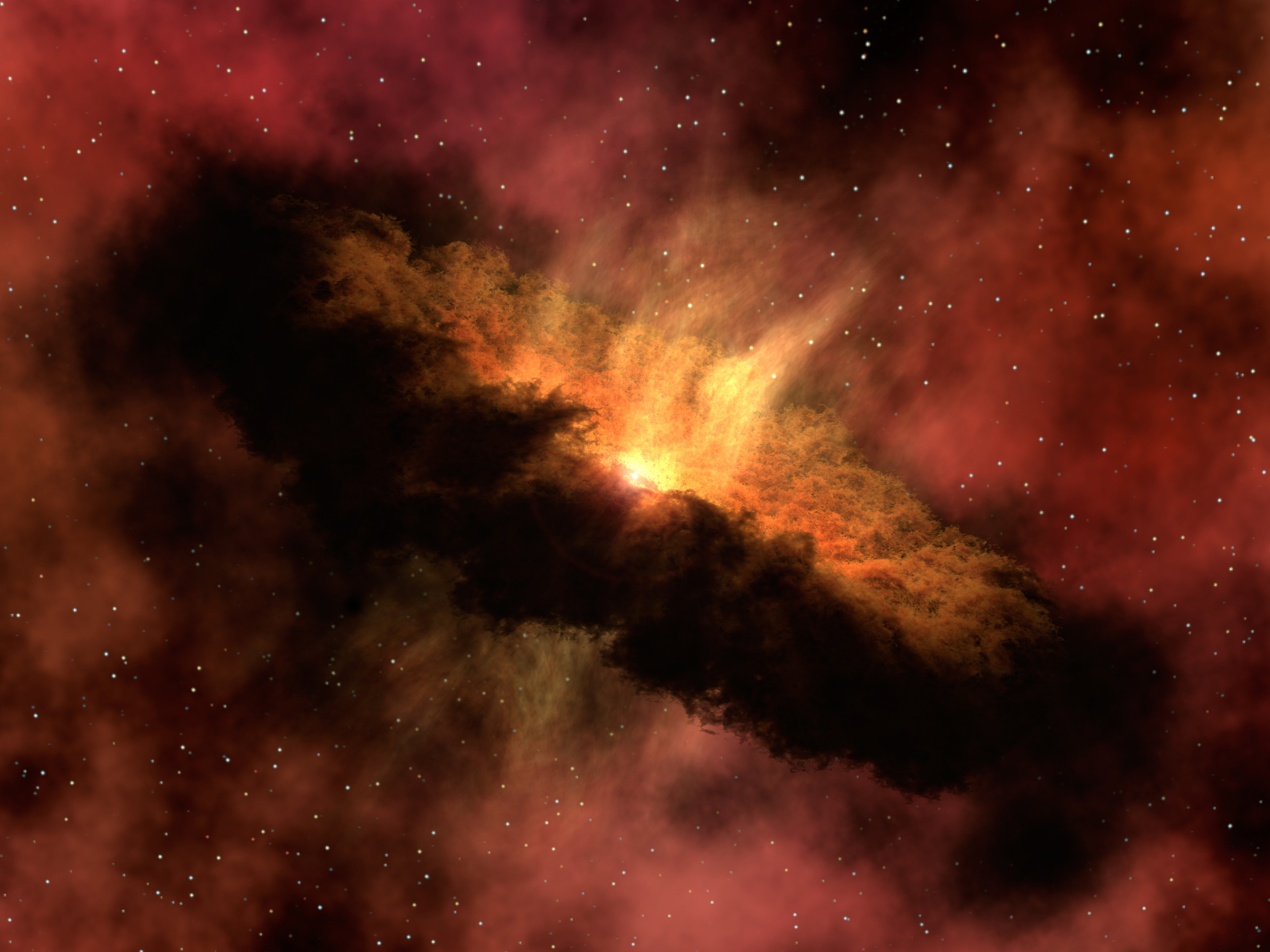 The above image is an artist's concept of a dusty, planet-forming disc like the one that, until very recently, surrounded the star TYC 8241 2652. Image Credit: NASA/JPL-Caltech

That was a good one! Astronomers have witnessed a disappearing act around a young sun-like star called TYC 8241 2652, located about 450 million light-years away. Previously, enormous amounts of dust circled the star. Now, the dust is nowhere to be found.

A new study on the observations appeared July 5th issue of the journal Nature. The study was led by Carl Melis of the University of California, San Diego. The co-author of the study is Ben Zuckerman of UCLA, whose research is funded by NASA. The journal may be visited online at this URL: www..nature.com/nature .

A dusty disk around TYC 8241 2652 was first seen by the NASA Infrared Astronomical Satellite (IRAS) in 1983, and continued to glow brightly for 25 years. The dust was thought to be due to collisions between forming planets, a normal part of planet formation. Like Earth, warm dust absorbs the energy of visible starlight and reradiates that energy as infrared, or heat, radiation.

The first strong indication of the disk's disappearance came from images taken in January 2010 by NASA's Wide-field Infrared Survey Explorer (WISE). An infrared image obtained at the Gemini telescope in Chile on May 1st, 2012, confirmed that the dust has been gone for two-and-a-half years.

A disappearance like this has not been seen previously in the many hundreds of stars that astronomers have studied for dust rings. And they thought the change was remarkably quick. So quick, in fact, that researchers thought their observations must have been wrong.

The astronomers have a few of possible explanations, but they say none are compelling. One possibility is that gas produced in the impact that released the dust helped to quickly drag the dust particles into the star and thus to their doom. In another possibility, collisions of large rocks left over from an original major impact provide a fresh infusion of dust particles into the disk, which caused the dust grains to chip apart into smaller and smaller pieces.

The result is based upon multiple sets of observations of TYC 8241 2652 obtained with the Thermal-Region Camera Spectrograph on the Gemini South telescope in Chile; IRAS; WISE; NASA's Infrared Telescope on Mauna Kea in Hawaii; the European Space Agency's Herschel Space Telescope, in which NASA plays an important role; and the Japanese/European Space Agency AKARI infrared satellite.

NASA's Jet Propulsion Laboratory, Pasadena, California, manages, and operated, WISE for NASA's Science Mission Directorate. Edward (Ned) Wright is the mission principal investigator and is at UCLA. The mission was selected competitively under NASA's Explorers Program managed by the agency's Goddard Space Flight Center in Greenbelt, Maryland. The science instrument was built by the Space Dynamics Laboratory in Logan, Utah. The spacecraft was built by Ball Aerospace & Technologies Corp. in Boulder, Colorado Science operations and data processing take place at the Infrared Processing and Analysis Center at the California Institute of Technology in Pasadena. Caltech manages JPL for NASA. You can learn more about WISE mission online at http://www.nasa.gov/wise, http://wise.astro.ucla.edu and http://jpl.nasa.gov/wise .

IRAS was executed jointly by the United States (NASA), the Netherlands and the United Kingdom. The Infrared Telescope is operated and managed for NASA by the University of Hawaii, located in Honolulu. Learn more about IRAS online at irsa.ipac.caltech.edu/IRASdocs/iras.html .