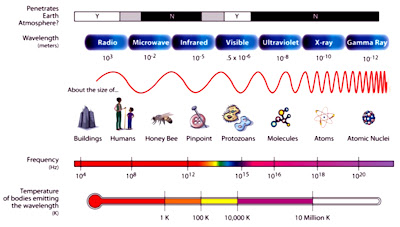 The above image is a chart explaining the spectrum of electromagnetic radiation (EMR). The NuSTAR mission examines the universe in the High-energy X-ray band of the EMR. Image Credit: NASA/JPL-Caltech

We now continue our review of NASA's Nuclear Spectroscopic Telescope Array (NuSTAR) mission, which launched June 13th. In this outing, we focus (pun intended) on the telescope itself and the X-rays it observes...

X-rays cannot, however, penetrate our atmosphere because it is actually quite thick. As a result, X-ray telescopes must operate from space.

What types of objects emit X-rays? The hottest, densest and most energetic objects in the universe glow with X-rays. The hotter the object, the more light it radiates at higher energies. Our bodies, for example, have temperatures of hundreds of kelvins (about 98 degrees Fahrenheit), and glow with lower-energy infrared light we can’t see with our eyes. The surface of our sun has a temperature of 6,000 kelvins (approximately 10,000 degrees Fahrenheit) and is glowing predominantly with visible light. Feeding black holes, supernova remnants and other objects with temperatures of millions of kelvins (degrees Fahrenheit) shine with X-rays. It is these objects that NuSTAR will study.

Since Galileo’s first homemade telescope in 1609, astronomers have been using mirrors and lenses to focus light and study the cosmos. X-rays are a form of light like the visible light we see with our eyes, but they have wavelengths about the size of an atom, or 10,000 times smaller than that of visible light. X-rays interact with matter and reflect off surfaces very differently than visible light.

As a result, focusing X-ray light requires a different type of design than traditional telescopes. Most of the designs in use for astronomical telescopes are based on variations of the same basic “reflector geometry,” first invented by Hans Wolter in 1952. As explained below, this technology exploits the fact that more X-rays can be reflected when they hit surfaces at very small, glancing angles.

Telescopes operating in the low-energy part of the X-ray band have flown on numerous missions, but until now, no space telescope has focused high-energy X-rays into sharp images. Over the last decade, the technologies behind high-energy X-ray telescopes have seen significant breakthroughs, with NuSTAR’s design being at the forefront, and the first to be launched into orbit.

The NuSTAR telescope consists of three main parts: the optics, or mirrors, which focus the light; the detectors, which record the image; and an extendable mast, which holds the optics and detectors at the required 33-foot (10-meter) separation distance once in orbit. NuSTAR has two optics units aligned to look at the same location on the sky. The two sets of images are added together on the ground to see fainter objects.

X-rays don’t behave like visible light. They have much higher energies and only reflect off surfaces at glancing angles, like stones skipping off the surface of a lake. While visible light can reflect off a mirror at essentially any angle, an X-ray hitting a flat surface head-on will be absorbed.

Telescope designs that focus X-rays must therefore use mirrors that are nearly parallel to the incoming X-ray beam. This is accomplished with conical mirrors. An individual mirror has two near-conical sections — a front and a back — so that X-rays reflect twice before heading toward the focal plane, where the light is focused. The two reflections are required to remove distortions that would otherwise arise in the image.

A single mirror by itself will only intercept a small amount of light because its surface is nearly parallel to the incoming beam of radiation. To increase the collecting area, X-ray telescopes use multiple mirrors, often called shells, with different sizes, nested inside each other. Each shell’s surface has a slightly different angle relative to the incoming radiation, so that they all focus X-rays to the same spot on the focal plane.

This type of design, called grazing-incidence X-ray optics, has been used on previous low-energy X-ray missions, including NASA’s Chandra X-ray Observatory. The challenge faced by NuSTAR is to extend these optics to higher energies, which require even smaller, or more glancing, reflecting angles. Because the surfaces must be almost parallel to the beam, many more reflectors are needed. They must also be thin so they don’t block too much light. The Chandra mirror has four shells, each between 0.8 to 1.2 inches (2 to 3 centimeters) thick, whereas NuSTAR requires 133 shells that are 0.008 inch (0.02 centimeter) thick — about the thickness of a fingernail.

To manufacture NuSTAR’s optics, very thin, smooth glass segments were formed, coated with the specialized films and mounted into two optic modules. Each shell, or layer, is made up of between 12 and 24 pieces.The curved pieces were carefully crafted at NASA’s Goddard Space Flight Center in Greenbelt, Md. Flexible, thin glass just like that found in laptop and cell phone screens, was shaped by placing it over molds, and then heated in ovens to temperatures of 1,100 degrees Fahrenheit (593 Celsius). As the glass was heated, it bent to the appropriate rounded shape. More than 9,000 individual mirror segments were created for NuSTAR’s nested mirrors.

The reflective coatings, consisting of alternating layers of platinum and carbon, or tungsten and silicon (depending on the shell) were applied in a specially designed vacuum chamber at the Danish Technical University Space Centre in Denmark. The complex, tightly nested arrangement of mirror pieces was assembled at Columbia University’s Nevis Laboratory just outside New York, N.Y. Starting from the inside out, each piece was carefully added to a growing barrel, spaced apart by graphite and held together by epoxy. To be continued...