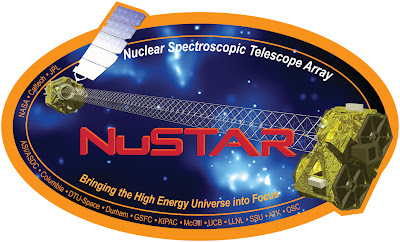 The above image is a promotional sticker for NASA's NuSTAR mission. Organization affiliations are displayed around the border of the sticker. Image Credit: NASA/JPL-Caltech

We now continue our review of NASA's Nuclear Spectroscopic Telescope Array (NuSTAR) mission, which launched June 13th. In this outing, we get an overview of the NuSTAR mission science...


NuSTAR will dramatically change the way astronomers view the high-energy X-ray sky. The mission’s main objective is to obtain detailed images of regions of the sky at these energies. Despite NuSTAR’s small size and low cost, it will have more than 10 times better resolution and more than 100 times better sensitivity than any previous mission working in this high-energy regime.

The five primary science goals for its two-year baseline mission are:

When enough matter is packed into a small region, it inevitably collapses to form a black hole — a tear in the fabric of space-time. The name “black hole” comes from the fact that even light cannot escape the overpowering grasp of the matter’s gravity. Black holes formed in the early universe, and by “swallowing” matter, stars and even other black holes, they grew over the course of cosmic time. Smaller black holes are also being created throughout the cosmos as massive stars end their lives. When a massive star explodes, it hurtles matter into space; if the star is massive enough, then its core will collapse into a black hole.

When a black hole “feeds” from matter falling onto it, the matter forms a swirling disk, heats up to very high temperatures and then disappears from view forever. The hot matter reaches up to hundreds of millions of degrees in temperature and radiates copious amounts of X-rays.

NuSTAR will search for these telltale X-rays streaming from regions close to the invisible black holes. It will observe known black holes, and discover new ones, of many sizes. The smallest the observatory can see are peppered throughout our Milky Way galaxy, and have masses as low as a few times that of our sun. The largest black holes are formed at the centers of galaxies, and can have masses up to millions or billions of times the mass of our sun. NuSTAR will also observe a poorly understood class of objects known as “ultraluminous X-ray sources,” some of which are considered likely intermediate-mass black holes, with masses a few thousand times that of our sun.

In our galaxy, the mission will probe the crowded center, where unseen black holes are lurking. High-energy X-rays can penetrate deeper through gas and dust than lower-energy X-rays, so NuSTAR will find new, hidden stellar relics. Working in coordination with a vast network of other facilities, including NASA’s Chandra X-ray Observatory, NuSTAR will also peer into the “monster in the middle” of our galaxy, a sleeping supermassive black hole about four million times the mass of our sun, and address questions about its mysterious behavior.

In the distant universe, the mission will spend months hunting for hidden black holes buried in the hearts of dusty galaxies. All galaxies are thought to harbor supermassive black holes at their cores. Most of these, like our Milky Way black hole, are dim at all wavelengths of light. They are sometimes thought of as “sleeping” and are undetectable in even nearby galaxies. However, some fraction of black holes, the so-called active ones, swallow dust and gas and shine brightly. Of these active black holes, about two-thirds are thought to have gone undetected due to obscuring layers of dust. NuSTAR will uncover many of these hidden objects, providing a complete census of active black holes.

NuSTAR data will be used together with that from other telescopes studying different wavelengths, such as NASA’s Hubble Space Telescope (visible light); NASA’s Spitzer Space Telescope (infrared), Chandra and XMMNewton (both low-energy X-rays). Some NuSTAR observing programs will simply use existing, archival data from these other observatories, while other programs will require coordinated scheduling. For example, working with XMM-Newton, NuSTAR is planning to spend several weeks doing coordinated observations of powerful, active galaxies with the goal of making precise measurements of the rate with which their central supermassive black holes are spinning. Such measurements are not possible by either telescope individually, but by working together, NuSTAR and XMM-Newton will inform astronomers about the physical conditions near the galaxy’s central engine, as well as probe how supermassive black holes form.

Surveys of well-studied fields in the sky by NuSTAR will also help solve the enigma of how black holes and galaxies grow and evolve together.

Black holes are the end state of the most massive stars in the universe. Other less massive stars leave behind different types of stellar remnants when they die. For example, stars that aren’t quite big enough to produce black holes, but are still massive enough to explode, result in neutron stars. These are incredibly dense objects. If the sun were a neutron star, its matter would be squeezed into something the size of Pasadena. When neutron stars form, collapsing in supernova blasts, their atoms are crushed, forcing the electrons and protons together, and leaving mainly neutrons.

When even less massive stars die, such as our sun, they don’t fully explode. Instead they puff up into red giants, and then shed their outer layers. The cores of these stars also collapse into compact objects, called white dwarfs.

NuSTAR will search for all of these stellar embers, primarily in the center of our galaxy, as well as examine known ones. When these embers are in binary star systems, they can accrete material from their partners. As this material falls onto the dense core, it heats up, radiating high-energy X-rays. The observatory will give astronomers a new tool to study our galaxy’s stellar graveyard, revealing how the remains are distributed.

The mission will look at other types of exotic, dead stars too. One class of neutron star, called magnetars, have the most intense internal magnetic fields known in the universe, quadrillions of times greater than Earth’s. As the magnetic fields decay, powerful bursts are triggered lasting milliseconds to years. NuSTAR will provide new insight into these mysterious, poorly understood objects.

NuSTAR will also probe pulsars, another class of neutron star that send out beams of radiation as they rotate around like a lighthouse beacon. These objects produce powerful winds carrying particles at nearly the speed of light. When the winds hit surrounding material, they heat it up, forming unusual nebulae. NuSTAR will help understand the physics of this dramatic process.

How Do Stars Explode?

Another one of the mission’s goals is to understand how the elements all around us, including the chemicals making up our bodies, were forged inside stars. When the most massive stars explode as supernovae, they synthesize and disseminate a range of elements, including the heaviest ones, such as iron. Without supernovae, there would be no iron circulating around in your blood, nor gold for making jewelry. The heavier elements are also needed to seed new generations of stars.

NuSTAR will offer a new way to examine this cycle of life, death and rebirth in the universe. It will thoroughly study two well-known supernova remnants: Cassiopeia A in our galaxy, and SN 1987A in a small neighboring galaxy. Astronomers using NuSTAR will be able to sift through the remains of these exploded stars by measuring the amount, distribution and speed of radioactive material released by the explosion. In particular, the isotope Titanium 44 (44Ti) is a critical diagnostic of supernova explosions, since it comes from near the “fallback region” of the explosion. Some models predict 44Ti is ejected into the cosmos as part of the colossal explosion. Other models predict that 44Ti fails to reach sufficient speeds to escape, and instead falls back on to the stellar corpse leftover from the blast. NuSTAR observations of historic, nearby supernovae will test these models.

Despite being well studied, exactly how a supernova explosion occurs is still unknown. NuSTAR will help reveal the physics behind the moment when a massive star erupts, lighting up the cosmos like fireworks. Such information is fundamental for understanding how the elements are forged and distributed by these massive explosions.


A small fraction of the most exotic supermassive black holes exhibit extreme behavior — spewing out jets of material moving very close to the speed of light. These jets can be so powerful that they choke off the creation of stars, leading to the death of the surrounding galaxy. The processes that create these jets, and which accelerate the high-energy particles within them, are not understood. By teaming up with observatories that see in various bands, from radio to high-energy gamma-rays, NuSTAR will help unravel the exotic physics underlying these extreme black holes.


Another goal of NuSTAR is to witness a supernova as it unfolds. This would only be possible if such an event occurs during the mission’s lifetime, and at close enough distances for the observatory to see it. A supernova resulting from the death of a massive star is estimated to occur once every 30 years or so in our galaxy. About every five years, a much more luminous type of supernova, believed to result from the violent detonation of a white dwarf star, occurs in the space between our galaxy and the nearest cluster of galaxies, called the Virgo cluster. The 2011 Nobel Prize in Physics was awarded to a team of astronomers who used this second type of explosion to map the expansion history of the universe. Their work provided conclusive evidence that the expansion rate of the universe is increasing, implying the existence of a mysterious force dubbed “dark energy.” NuSTAR observations can shed light on how this detonation happens. Such observations, called targets of opportunity, will be the highest priority for the observatory when they occur.

NuSTAR will also observe flaring stars, star-forming galaxies, distant clusters of galaxies and more. Closer to home, it will measure X-rays coming from our sun’s corona — an outer atmosphere consisting of scorching hot gases. The observatory will be much more sensitive to solar X-rays than the previous X-ray mission studying the sun, NASA’s Reuven Ramaty High Energy Solar Spectroscopic Imager (RHESSI), and will provide detailed images of flares, loops and other eruptions from the sun’s surface. NuSTAR has the ability to reveal tiny flares on the sun, called “nanoflares,” if they exist, and answer the long-standing mystery of how the solar corona is heated.

As is typical of most NASA Small Explorer missions, during its two-year baseline mission, NuSTAR will not have a Guest Observer program in which members of the larger astronomy community can apply for time on the telescope. However, assuming the continued health of the NuSTAR observatory, the mission team will propose for an extended mission, during which guest investigators can participate in the NuSTAR science.