Kirk or Wesley? You Decide. But Hurry! 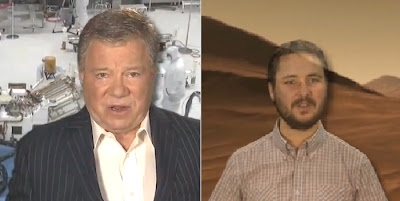 The above frames were taken from the two versions of NASA's video, Curiosity's "Grand Entrance" to Mars. One version is hosted by William Shatner (left) and the other is hosted by Wil Wheaton (right). Image Credit: NASA

To help promote the upcoming landing of NASA's Mars Science Laboratory / Curiosity rover. NASA has released not one, but two versions of its new video, Curiosity's "Grand Entrance" to Mars. The 4-minute 12-second videos are the same except for their host and narrator. With a nod to the fans of the Star Trek franchise, one video is hosted by William Shatner (who played Captain James T. Kirk) and the other video is hosted by Wil Wheaton (who played Wesley Crusher). Links to these videos abound on the Internet. The ones presented below are on Youtube.com.

CLICK HERE to watch the video hosted by William Shatner.

CLICK HERE to watch the video hosted by Wil Wheaton.

Regardless of your possible love/hate relationship with either (or both) of the represented Star Trek characters, you are sure to learn a lot about this most ambitions mission to the Red Planet to date. But don't wait. Run your video of choice now and learn all that you can.