iTunes for the Apollo 11 43th Anniversary 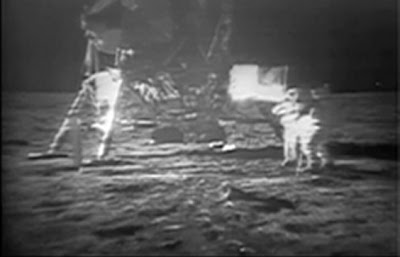 A very happy 43th anniversary to NASA's Apollo 11 mission, the first to land humans on the surface of the Moon. On July 20, 1969 two astronauts — Apollo 11 Commander Neil A. Armstrong and Lunar Module pilot Edwin E. "Buzz" Aldrin Jr. — landed in Mare Tranquilitatis (the Sea of Tranquility) on the Moon in the Lunar Module (LM) while the Command and Service Module (CSM), with Command Module (CM) pilot Michael Collins in lunar orbit.

In recognition of this achievement, I direct your attention to a collection of video restorations (albeit a work in progress) from the Apollo 11 mission. In July 2009, NASA released restored video from the July 20, 1969, live television broadcast of the Apollo 11 moonwalk. The work was done by a team of Apollo-era engineers who helped produce the 1969 live broadcast of the moonwalk. They acquired the best of the broadcast-format video from a variety of sources for the restoration effort. These included a copy of a tape recorded at NASA's Sydney, Australia, video switching center, where down-linked television from Parkes and Honeysuckle Creek was received for transmission to the U.S.; original broadcast tapes from the CBS News Archive recorded via direct microwave and landline feeds from NASA's Johnson Space Center in Houston; and kinescopes found in film vaults at Johnson that had not been viewed since 1973. Please click and enjoy!

CLICK HERE to view the Quicktime-formatted video excerpts from the Apollo 11 mission.

CLICK HERE to bring up the iTunes page of Apollo 11 recordings.

CLICK HERE to visit the NASA commemorative site of images and video from the Apollo Program.