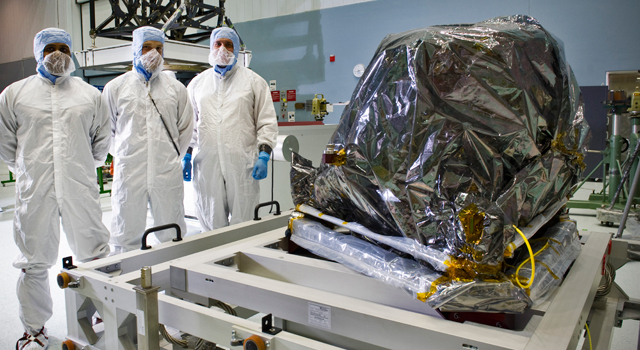 In the above image, three engineers from the European Space Agency (in blue hoods) are investigating the Mid-Infrared Instrument (MIRI) that recently arrived at NASA Goddard Space Flight Center. The MIRI sees light in the mid-infrared region of the electromagnetic spectrum. Image Credit: NASA

Ever wondered what goes on in a NASA spacecraft clean room? Now you can find out! Members of the general public are now able to track the progress of the under-construction James Webb Space Telescope. Your view is of a large clean room inside Building 29 of NASA's Goddard Space Flight Center (Goddard), in Green Belt, Maryland, where the recently delivered Mid-Infrared Instrument (MIRI) will soon be integrated into Webb's science instrument payload.

You are treated online to still views from two web-cameras mounted in the clean room. Their images are updated every minute. Oh. And these two web-cameras have been affectionately dubbed "Webb-cams."

Developed by a consortium of 10 European institutions and NASA's Jet Propulsion Laboratory (JPL) in Pasadena, California, and delivered by the European Space Agency (ESA), MIRI is the first Webb telescope instrument to be completed. NASA engineers accepted delivery from the ESA engineers on May 29th.

Of the James Webb Space Telescope's four science instruments, only MIRI can see light in the mid-infrared region of the electromagnetic spectrum. This unique capability will allow the Webb telescope to study physical processes occurring in the cosmos that the other Webb instruments cannot see.

MIRI's sensitive detectors will allow it to make unique observations of many things, including the light of distant galaxies, newly forming stars within our own Milky Way, and the formation of planets around stars other than our own, as well as planets, comets and the outermost debris disk in our own solar system.

And now, the mission particulars....

The Webb Telescope project, managed at Goddard, is the world's next-generation space observatory and successor to NASA's Hubble Space Telescope. It is a joint project of NASA, the European Space Agency and the Canadian Space Agency.

For more information about MIRI and its arrival at NASA Goddard, visit: http://www.jpl.nasa.gov/news/news.cfm?release=2012-174 .