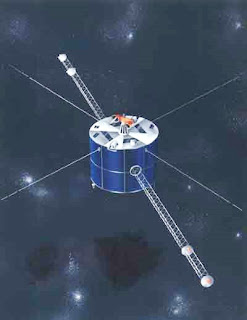 The above image is an artist's concept of the Geotail satellite. Image Credit: NASA

July 24 marks the 20th anniversary of the launch of the GEOTAIL satellite aboard a Delta II rocket (July 24, 1992). The GEOTAIL mission is a collaborative project undertaken by the Institute of Space and Astronautical Science (ISAS) and NASA.

The primary purpose of the Geotail mission is to study the structure and dynamics of the tail region of Earth's magnetosphere with a comprehensive set of scientific instruments. For this purpose, the orbit was designed to cover the magnetotail over a wide range of distances: 8 Re (radii) to 210 Re from the earth. This orbit also allows the mission team to study the boundary region of the magnetosphere as it skims the magnetopause at perigees. In the first two years the double lunar swing-by technique was used to keep apogees in the distant magnetotail. The apogee was lowered down to 50 Re in mid November 1994 and then to 30 Re in February 1995 in order to study substorm processes in the near-Earth tail region. The present orbit is 9 Re x 30 Re with inclination of -7° to the ecliptic plane.

As of this writing, the Geotail mission is still active. The Geotail, Wind, Polar, SOHO, and Cluster missions are all part of the International Solar-Terrestrial Physics (ISTP) project.