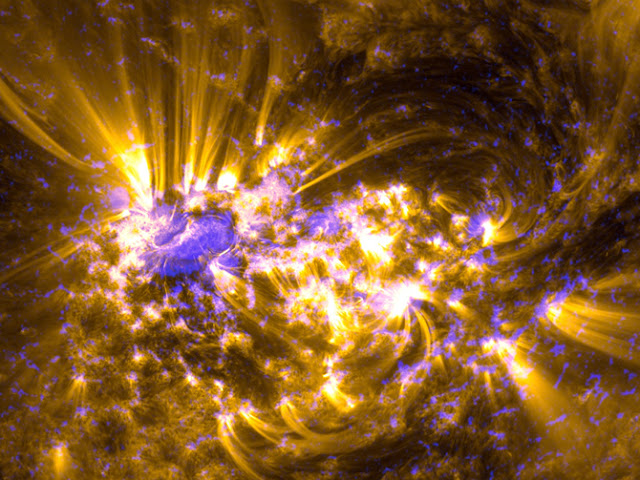 The above image combines two sets of observations of the sun at 14:45 UTC (10:45 AM EDT) on July 12th from the Solar Dynamics Observatory (SDO) in order to give an impression of what the sun looked like shortly before it unleashed an X1.4 solar flare. The image incorporates light in the 171 Angstrom wavelength (shown in yellow), which shows off giant loops of solar material overlying the middle of the sun over Active Region 1520 (AR 1520) where the flare originated. The second set of observations (in blue) is called a magnetogram, which highlights magnetic fields on the sun. The combined views can help scientists understand the magnetic properties of the sun that lead to giant explosions like flares. Image Credit: NASA/SDO/AIA

Check your tickets. The arrival of the AR 1520 CME has been moved up!

This looks like a good time for a quick refresher on CMEs.

A coronal mass ejection (CME) is a massive burst of solar wind, plasma, and magnetic fields rising above the solar corona or being released into space. CMEs are often associated with other forms of solar activity, most notably solar flares, but a causal relationship between the two has not been established. Most CMEs originate from active regions on Sun's surface, such as groupings of sunspots associated with frequent flares. Near a solar maximum — the period of greatest activity in a solar cycle — the sun produces about three CMEs every day, whereas near a solar minimum — the period of least activity in a solar cycle — there is about one CME every five days.

When a CME reaches Earth, the shock wave causes a geomagnetic storm that may disrupt the Earth's magnetosphere, compressing it on the day side and extending the night-side magnetic tail. When the magnetosphere reconnects on the nightside, it releases power on the order of terawatt scale, which is directed back toward the Earth's upper atmosphere.

This process can cause particularly strong aurorae in large regions around Earth's magnetic poles. These are also known as the Northern Lights (aurora borealis) in the northern hemisphere, and the Southern Lights (aurora australis) in the southern hemisphere. CMEs, along with solar flares, can disrupt radio transmissions and cause damage to satellites and electrical transmission line facilities, resulting in potentially massive and long-lasting power outages.

Humans in space or at high altitudes, for example, in airplanes, risk exposure to intense radiation. Short-term damage may include skin irritation with potential increased risk of developing skin cancer, but it is likely that any affected individuals would recover from any such exposure.

As noted earlier, auroras this weekend are likely. Stay tuned...

To see other July 12th images as well as a SDO video of the flare, visit the NASA news release here, www.nasa.gov/mission_pages/sunearth/news/News071212-X1.4flare.html .

To learn more about the sun and to stay current on solar activity, visit the mission home page of Solar Dynamics Observatory (SDO), sdo.gsfc.nasa.gov .