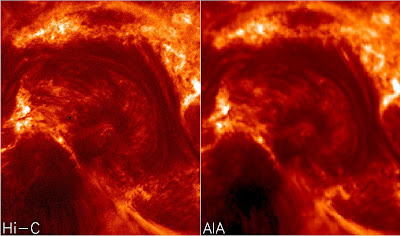 The above image composite shows one image (left) taken by NASA's High Resolution Coronal Imager (Hi-C) telescope and one image (right) taken by the Atmospheric Imaging Assembly (AIA) instrument aboard NASA's Solar Dynamics Observatory (SDO). Both images were taken during the time of the Hi-C sub-orbital flight on July 11th. Image Credit: NASA/SDO/Hi-C

Boy, oh boy. We have some really nice pics here...

Back on July 11th, from White Sands Missile Range in New Mexico, NASA performed a successful sub-orbital flight of the High Resolution Coronal Imager (HI-C). The solar telescope flew atop a Black Brant sounding rocket. Of the 602-second flight, actual data collection was expected to last for 381 seconds while Hi-C was above Earth's atmosphere. HI-C was billed as the highest resolution solar telescope ever to observe the solar corona. And now, we have the images to prove it.

Hi-C focused on a large active region on the sun (AR 1520) with some images revealing the dynamic structure of the solar atmosphere in fine detail. These images were taken in the extreme ultraviolet wavelength. This higher energy wavelength of light is optimal for viewing the hot solar corona.

The telescope acquired data at a rate of roughly one image every 5 seconds. Its resolution is approximately five times more detailed than the Atmospheric Imaging Assembly (AIA) instrument flying aboard NASA's Solar Dynamics Observatory (SDO). For comparison, AIA can see structures on the sun's surface with the clarity of approximately 675 miles and observes the sun in 10 wavelengths of light. Hi-C can resolve features down to roughly 135 miles, but observed the sun in just one wavelength of light.

The high-resolution images were made possible because of a set of innovations on Hi-C's optics array. Hi-C's mirrors are approximately 9 1/2 inches across, roughly the same size as the SDO instrument's. The telescope includes some of the finest mirrors ever made for space-based instrumentation. The increase in resolution of the images captured by Hi-C is similar to making the transition in television viewing from a cathode ray tube TV to high definition TV.

NASA's Marshall Space Flight Center is leading the international effort for Hi-C. Key partners include the University of Alabama at Huntsville, Smithsonian Astrophysical Observatory, University of Central Lancashire in Lancashire, England, and the Lebedev Physical Institute of the Russian Academy of Sciences.

To read more about HI-C, visit these URLs: