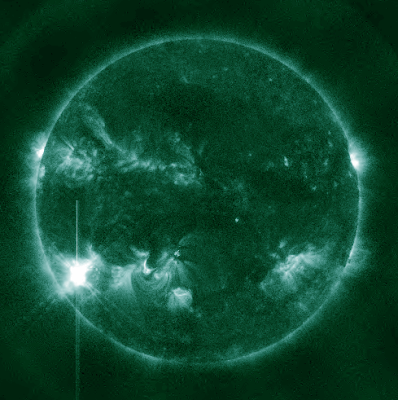 The above image was taken July 28th at 21:02 UTC by the Atmospheric Imaging Assembly (AIA), at 94 Angstroms, aboard the Solar Dynamics Observatory (SDO). The M6-class solar flare may be seen at the lower left. Image Credit: SDO/AIA

According to the peak flux scale, this flare was considered moderately strong. And as of yet, forecasters cannot confirm whether the flare produced a coronal mass ejection (CME). But even so, Earth would receive a glancing blow, but no more. That might change as that region continues to turn toward Earth.

Since we are talking about flares and CMEs and their potential implications, let's take this opportunity to review our primers on solar flares and CMEs.

A solar flare is an explosion on the sun that occurs when the energy stored in twisted magnetic fields (usually above sunspots) is suddenly released. Flares produce a burst of radiation across the electromagnetic spectrum, from radio waves to X-rays and gamma-rays.

A coronal mass ejection (CME) is a massive burst of solar wind, plasma, and magnetic fields rising above the solar corona or being released into space.

CMEs are often associated with other forms of solar activity, most notably solar flares, but a causal relationship between the two has not been established. Most CMEs originate from active regions on Sun's surface, such as groupings of sunspots associated with frequent flares. Near a solar maximum — the period of greatest activity in a solar cycle — the sun produces about three CMEs every day, whereas near a solar minimum — the period of least activity in a solar cycle — there is about one CME every five days.

With what have seen so far from AR 1532, things are sure to get interesting in the coming days. Stay tuned...