Already Dreaming of the Next Model... 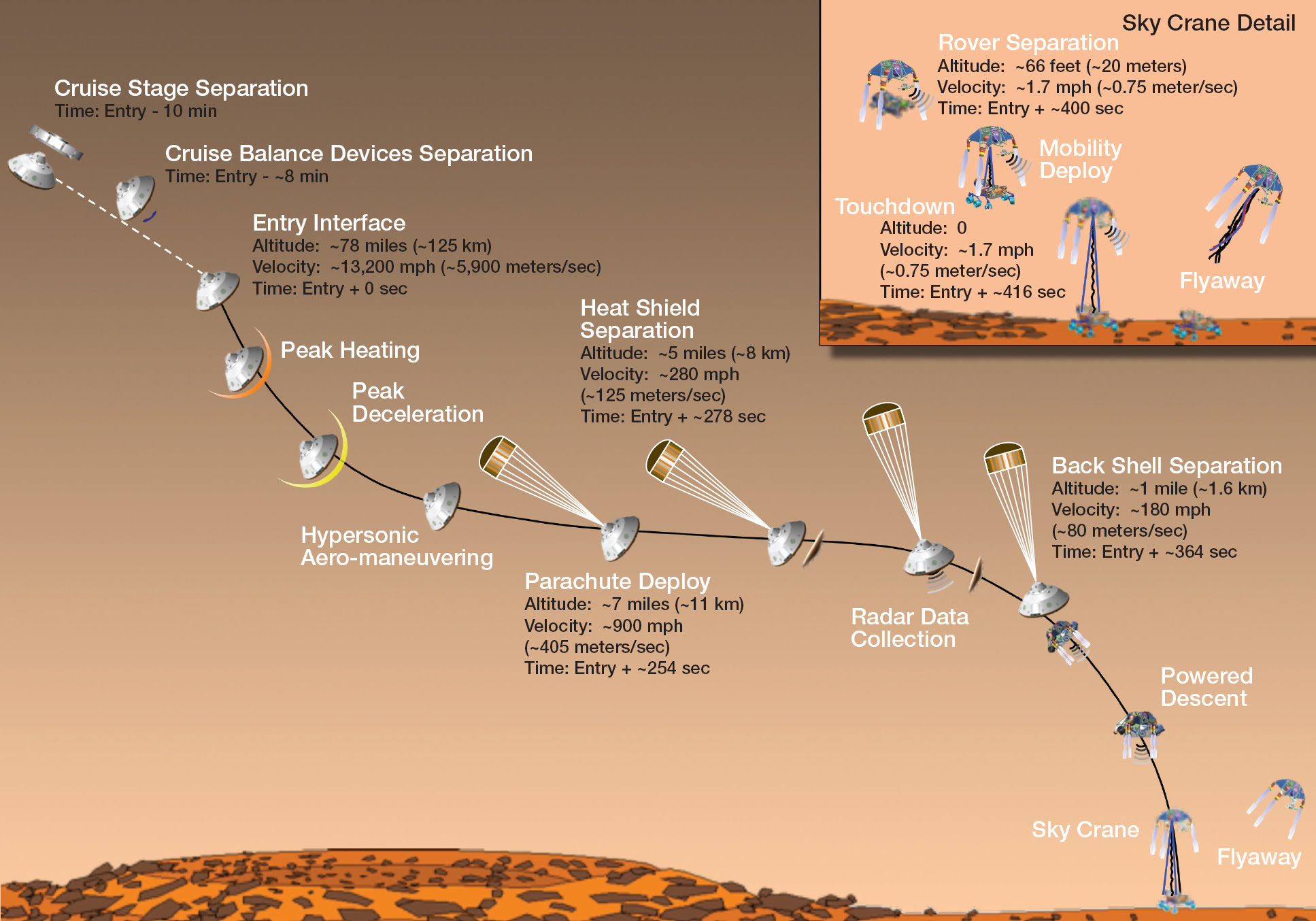 The above image provides an overview of the entry descent and landing stages for NASA's Mars Science Laboratory / Curiosity mission, planned to touch down on August 5th. Image Credit: NASA/JPL-Caltech

NASA's Mars Science Laboratory (MSL) Curiosity mission is set to land on the Red Planet August 5th. But even before the rover's odometer has begun to tick over, NASA's planners are already dreaming about the next model to come off the line.

The director of NASA's Mars Exploration Program (MEP), Doug McCuistion, was in the UK on July 10th for the 2012 Farnborough International Airshow. At the event, McCuistion speculated on the requirements of the next mission that would be designed from the ground up for Mars. The following is a general rundown of McCuistion's remarks at the event.

The future Mars mission must be cheaper than MSL/Curiosity, which is costing $2.5 billion. The future mission would cost no more than $800 million (about the budget of a NASA Discovery mission).

The mission should launch by 2018 to 2020. It would also feature larger parachutes, to help slow the spacecraft during entry. It would have at least one atomic clock to improve its landing accuracy. Also, it would have inflatable decelerators, also known as ballutes, to cushion the craft at touch-down (so it seems we are back to bouncing). The upshot is that with these noted items, mission controllers would be able to reduce the size of the landing ellipse, or increase the accuracy of the landing.

But even with the cost-cutting measures, McCuistion expects the mission to be viable and produce lots of good science, though he did note that lower-budget missions tended to be characterized by simpler systems that were not as challenging.

But low budget does not necessarily mean small craft. For example, McCuistion would like to move from the 69-foot (21-meter) chutes used by the Viking landers to new, 98-foot (30-meter) ones that are capable of producing more drag, and depositing a larger payload safely on the Martian surface.

This future Mars mission could come in the form of a rover (like Mars Exploration Rover Spirit or Opportunity) or a lander (like the 2008 Phoenix Mars Lander mission).

Finally, McCuistion added that the NASA Office of the Chief Technologist might have to finance the ballutes, the new parachutes, and the atomic clocks, since the MEP will most likely be strapped for cash for the foreseeable future.

Already in the pipeline is NASA's Mars Atmosphere Volatile Evolution (MAVEN) spacecraft, which is scheduled to launch in late 2013 and enter orbit around Mars in late 2014 or early 2015. The primary objective of MAVEN is to learn more about the Martian atmosphere, including the source of its methane.

And now, the program particulars...

NASA's Mars Exploration Program (MEP) is a science-driven program that seeks to understand whether Mars was, is, or can be, a habitable world. To find out, scientists are working to understand how geologic, climatic, and other processes have worked to shape Mars and its environment over time, as well as how they interact today.

The four science goals for MEP are: (1) Determine if life ever arose on Mars; (2) Characterize the climate of Mars; (3) Characterize the geology of Mars; and (4) Prepare for human exploration of Mars. To learn more, visit www.nasa.gov/mars and mars.jpl.nasa.gov .