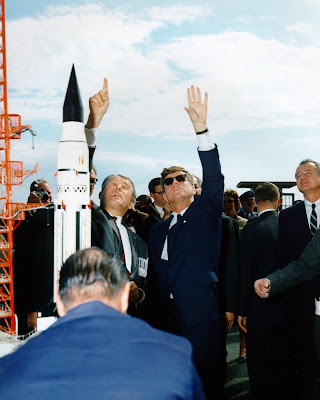 The 50th birthday of NASA's John F. Kennedy Space Center (KSC). Located on Merritt Island, Florida, KSC has been the launch site for every United States human space flight since 1968.

The facility was authorized in 1958 during the administration of President Dwight D. Eisenhower. It was originally known as the Launch Operations Directorate (LOD), reporting to the Marshall Space Flight Center in Alabama.

On July 1st, 1962, the site was renamed the Launch Operations Center, achieving equal status with other NASA centers. On November 29th, 1963, following the death of President Kennedy, the facility received its current name by Executive Order 11129.

To learn more about KSC's history, check out this URL: www.nasa.gov/centers/kennedy/about/history/index.html

The planet Mercury is at its greatest eastern elongation (26 degrees). On Sunday, June 24th, NASA's MErcury Surface, Space ENvironment, GEochemistry, and Ranging (MESSENGER) mission completed its 1,000th orbit of Mercury since orbit insertion in mid-March 2011. The primary mission was planned to end on March 17th, 2012, but NASA has announced an extension to MESSENGER for additional year. For more on Mercury and the MESSENGER mission, visit these URLs: www.nasa.gov/messenger and messenger.jhuapl.edu .

Asteroid 1221 Amor (1932 EA1) has its closest approach to Earth (0.745 AU). 1221 Amor is a Mars-crossing, near-Earth asteroid discovered on March 12th, 1932, by Belgian astronomer Eugène Joseph Delporte. 1221 Amor is the namesake of the Amor asteroids, a group of near-Earth astroids which approach Earth from beyond, but do not cross Earth's orbit. Most Amors do cross the orbit of Mars. Some suggest that the two moons of Mars, Deimos and Phobos, may be Amor asteroids that were captured by Mar's gravity.

Asteroid 216 Kleopatra (A905 OA, A910 RA) has its closest approach to Earth (2.036 AU). 216 Kleopatra is a main-belt asteroid discovered April 10th, 1880, from Pula, by Austrian astronomer Johann Palisa. 216 Kleopatra was named after the queen of ancient Egypt (Cleopatra) and it was recently discovered that it has two small moons.