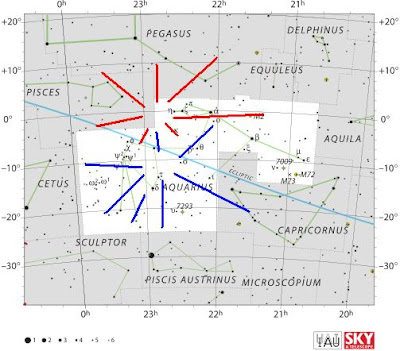 The above image is a chart of the constellation Aquarius, presented by the International Astronomical Union (IAU). The location of the radiants of the Northern Iota Aquarid meteor shower (red lines) and the Southern Iota Aquarid meteor shower (blue lines) are indicated. Image Credit: IAU and Sky & Telescope magazine (Roger Sinnott & Rick Fienberg)

This shower is separate from the Northern Iota Aquarid shower, which occurs from August 11th through September 10th and has a maximum on August 25th. Around maximum, this shower has an hourly rate of 5 to 10 meteors. And as the shower's name suggests, its radiant is also near Iota Aquarid, in the constellation Aquarius (R.A. 350°, Dec 0°).

The source of these showers is not known. There are various theories that they may be offshoots of one or more known showers which pass through the constellations Aquarius and Capricornus. It is suggested that the orbit of the parent body may have been perturbed over eons, leaving behind the orbits of earlier dust trails. As of this writing everything regarding Iota Aquarid parent bodies is conjecture and nothing is confirmed.