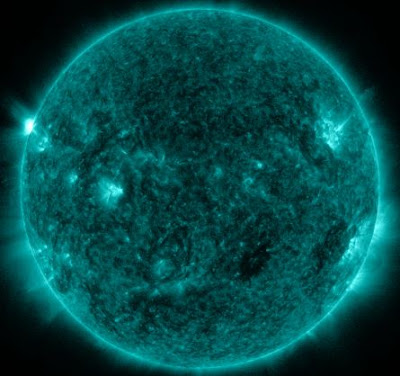 The above image was taken August 17th at 13:19 UTC by the Atmospheric Imaging Assembly (AIA), at 131 Angstroms, aboard the Solar Dynamics Observatory (SDO). The M2-class solar flare produced at that time can be seen on the east limb, produced by the soon-to-be Active Region 1547 (AR 1547). Image Credit: SDO/AIA

On August 17th, at 13:19 UTC, an M2-class solar flare was produced by a just-appearing region on the Sun's northeast limb. Later, at 13:54 UTC, The Large Angle and Spectrometric Coronagraph Experiment (LASCO) aboard the Solar and Heliospheric Observatory (SOHO) observed a coronal mass ejection (CME) that was produced by the flare. And then, at 17:20 UTC, an M1-class flare was produced by the same region. And then, that flare was accompanied by a Tenflare — a radio burst of 10cm or greater. Finally, after all of this fanfare, the new region was officially designated Active Region 1547 (AR 1547). But with all of this commotion, this region is still not as large as AR 1543, which is quickly approaching the west limb.

Even so, NOAA's forecast? The activity is expected to be low, with a slight chance of an M-class flare. Gee, I think that "chance" is looking pretty good with the arrival of our friend AR 1547.

Earth's geomagnetic field activity ranged from quiet to active levels for August 17th. Some active levels were observed (aurorae were seen above the Arctic Circle) between 00:00 and 03:00 UTC. This activity was caused by the arrival of the CME produced by AR 1543's C3 flare on August 13th. But the remainder of the day saw quiet to active conditions.

The geomagnetic field is expected to range from quiet to unsettled for August 18th through 20th with lingering effects from the CME and the arrival of arrival of a coronal hole high speed stream. Stay tuned...

To learn more about the Sun and to stay current on solar activity, visit the mission home pages of the Solar Dynamics Observatory (SDO), sdo.gsfc.nasa.gov and the Solar and Heliospheric Observatory (SOHO), sohowww.nascom.nasa.gov .