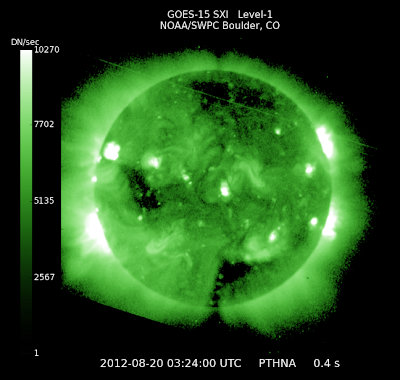 The above X-ray image of the sun was taken August 20th at 03:24 UTC by the Solar X-ray Imager (SXI) aboard the GOES-15 satellite. Image Credit: NOAA

Here at home, the geomagnetic field's activity ranged from quiet to unsettled over the 19th. A high-speed stream, caused by that coronal hole now turned toward Earth, began having an affect in the last 24 hours or so. You'll remember that on the 18th, around 08:00 UTC, the Advanced Composition Explorer (ACE) satellite recorded the solar wind speed increase from 400 km/s to 580 km/s. And soon thereafter, the Bz component of the interplanetary magnetic field (IMF) became negative, eventually reaching -12nT.  Bz returned to positive values around 14:00 UTC.  Earth currently remains in the positive region of the IMF. Forecast: The geomagnetic field is expected to be mostly unsettled with a chance for active conditions on the 20th (because of that high-speed stream) decreasing to a slight chance on the 21st and 22nd. Stay tuned...

To learn more about the sun and to stay current on solar activity, visit the mission home pages of the Solar Dynamics Observatory (SDO) (sdo.gsfc.nasa.gov), the Solar and Heliospheric Observatory (SOHO) (sohowww.nascom.nasa.gov) and the Advanced Composition Explorer (ACE) (www.srl.caltech.edu/ACE).