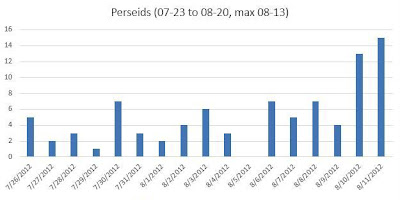 The above chart shows the number of Perseid fireballs recorded through August 11th by the eight cameras of NASA's All Sky Fireball Network (fireballs.ndc.nasa.gov). Image Credit: James M. Thomas

The Perseid meteor shower is well underway! The shower runs from July 23rd through August 20th and the maximum this year is over August 11th/12th. We are trying to put the shower in perspective by referencing the data gathered from NASA's All Sky Fireball Network, which is part of NASA's Meteoroid Environment Office.

I've said this before and I'll say it again. Please remember that the Network currently has only eight video cameras, with two in New Mexico and the rest spread over Alabama, Georgia and South Carolina. But that being said, the data is very interesting. From July 26th through August 11th, the average number of nightly Perseid fireballs recorded is 5.12. And, with the exception of no Perseid fireballs recorded on August 5th (which might have been the result of technical issues), there has been at least one Perseid fireball recorded each night. And wow! Look at the rise as we approach the August 13th maximum. The 10th saw 13 fireballs and the 11th saw 15. We look forward to see what the maximum has in store for us. For these Network observations, a fireball is defined as any meteor with a brightness equal to Venus or brighter.