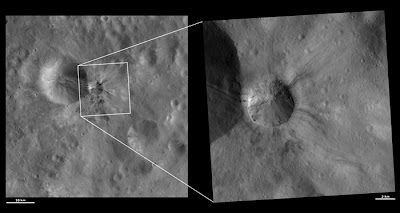 NASA's Dawn mission engineers are assessing the status of a spacecraft reaction wheel, part of a system that helps the spacecraft point precisely. Back on August 8th, onboard software had powered-off the wheel. Dawn is now using its thrusters to point at Earth for communications. The rest of the spacecraft is otherwise healthy. Dawn's mission is to study the geology and geochemistry of the giant asteroid Vesta and dwarf planet Ceres, the two most massive objects in the main asteroid belt.

During a planned communications pass on August 9th, the team learned that the reaction wheel had been powered off. Telemetry data from the spacecraft suggest the wheel developed excessive friction, similar to the experience with another Dawn reaction wheel in June 2010. The Dawn team demonstrated during the cruise to Vesta in 2011 that, if necessary, they could complete the cruise to Ceres without the use of reaction wheels.

The spacecraft has been orbiting Vesta since July 15, 2011. Dawn concluded its primary science observations of Vesta on July 25, 2012, and has been spiraling slowly away from the giant asteroid using its ion propulsion system. Ion thrusting was halted to accommodate the reaction wheel investigation, which may briefly delay the escape from Vesta. NASA officials note that even with the technical challenges of the mission, they are thrilled by the success of the Vesta study and they look forward to the study of dwarf planet Ceres, beginning in 2015.

And now, the mission parriculars...